Actor Sylvain Massé Gives Me Some Pointers About Reading Aloud 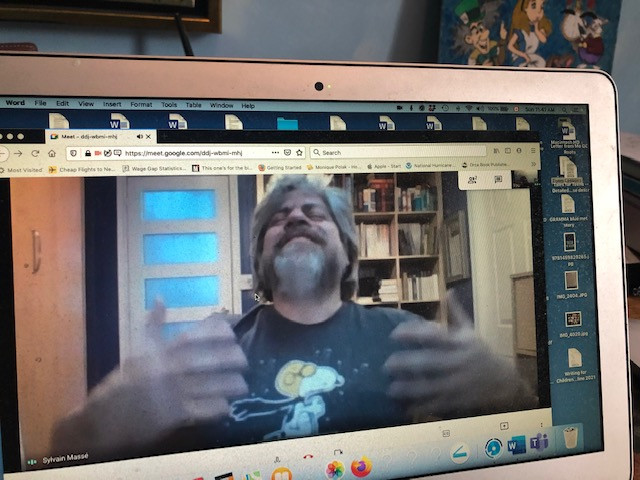 You must be wondering who the man in today's pic is -- and what he's doing!

First of all, I need to tell you I already thought I was very good, even excellent(!), at reading aloud. (I love doing it, and I do it a lot -- just ask my boyfriend!!). But I learned many new tricks from Sylvain!

Here's some background to explain why my path crossed Sylvain's. For a special Blue Metropolis Literary Foundation project, I was asked to write two short stories for kids. Both stories are connected to the pandemic. One is for readers aged around 11 or 12; the other story is for older teens. Next week, I go to a recording studio to record the stories, which will be available on Blue Met's website. And Blue Met hired Sylvain to coach me, and to direct next week's recording session.

I wasn't expecting to take notes during my "lesson" yesterday with Sylvain -- but it turned out to be so interesting that I grabbed a piece of paper and started writing stuff down. Sylvain told me that for him, reading a story out loud is an "auditory caress." I LOVE THAT! I've always felt that reading aloud is a gift we give to someone else -- Sylvain feels that way too. Only he said it in French: "c'est un cadeau qu'on donne à quelqu'un."

Sylvain listened carefully as I read my first story, "Gramma's Pandemic Birthday." Afterwards, he pointed out that I needed to work on "la metronomie." He explained that my pacing was too even -- that I should try speeding up occasionally, then slowing down in other parts of the story. He pointed out that this is what we do when we tell a story in real life. Though it might sound obvious to you, this pointer is something I'd never realized before.

Sylvain also reminded me of something super important -- "Have fun!" he told me. That's something I often tell my students when they are working on a writing project. The reader -- or the listener -- can tell if the writer (or storyteller) is having fun.

My second short story is called "Zoom Lessons" and it's about a teenager who has a crush on a girl named Laurence Tessier. I tell you this because it helps explain Sylain's expression in today's pic. He suggested that every time the narrator mentions Laurence, the word should have a kind of magical effect -- because the narrator is mesmerized by Laurence.

My favourite part of yesterday's lesson came when Sylvain asked me about Laurence's personality. "What kind of girl is she?" he wanted to know. To be honest, I hadn't thought that much about Laurence until that very moment. And when I did come up with an answer, it helped me understand my own story a little better -- and I think it also helped improve my reading.

So the point of today's blog entry is: we are never too old to learn new things, and we need to get deeper into our characters whether we are writers or actors or people who read their stories aloud. Also, this morning was the first day of the new semester at Marianopolis College, and as I always do on the first day, I read my students Maurice Sendak's book Pierre. And you know what? Thanks to Sylvain's lesson, I think I read a little better than usual.