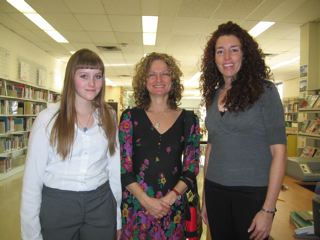 Hey, blog readers! Today, I am writing to you from the library at Beurling Academy in Verdun. I'll be here the next three days doing workshops with the school's Grades 10 and 11 students. So far, if I may say so myself, things are going super well! That may be because some of the students here already know quite a bit about the Holocaust, the subject of my book What World Is Left. They have been studying the Holocaust in their Ethics classes. Last week, Ethics teacher Miss Debi took some of her students to the Montreal Holocaust Centre where they actually had the opportunity to meet and interview survivors.

I was telling my first group this morning how important details are to story telling. Details bring a story alive, but too many details can bog a story down and make your reader lose interest. So it's a question of finding the right balance. By way of example, I pointed out a few details I had observed by looking at my audience. A student named Bradley was the only one in the group who had his back to me. When I got him to turn around, Bradley admitted something interesting: that he dislikes making eye contact. This led us to a little discussion about eye contact and its importance (I told Bradley he is more likely to be stopped at the border if he doesn't make eye contact with the border patrol officer!). Anyway, Bradley happens to have very kind eyes, and when he did look at me, it was great! I also observed a student named Tamara (that is Tamara in today's pic, wearing a white shirt) who was scratching her paper with her pen. In all my years of working with students, I had never noticed this sort of scratching before -- and so I immediately wrote it down in my notes. As I told the students, I am always looking for young people to "people" my stories. So, who knows? Maybe Bradley and Tamara will turn up (names changed, of course!) in an upcoming book!

At recess, Tamara re-appeared and she told me a little about her visit to the Montreal Holocaust Centre last week. Tamara had mixed feelings about interviewing a survivor. She wanted to know more, but felt a little bad about her curiosity.... guilty, I guess. I told Tamara that her response shows remarkable sophistication and sensitivity. Perhaps here, too, as in including details in a story, the trick is to find the right balance. Curiosity is vital, but we also want to tread gently when we ask difficult questions. So special thanks to the students I've met so far for being so open with me. Thanks to Miss Debi, and to librarian Helene Bourguignon (she is also in today's pic) for arranging this week's visit. Oh, and I nearly forgot to tell you two fun coincidences. A student here named Netta had already heard me before -- a couple of years ago when I visited her school in New Carlisle in the Gaspe! (Hope I didn't say too many of the same things, Netta!) And a Beurling math teacher named Mr. Swiderski popped by to say hi, too. He was my student at Marianopolis in 1995!! (I love coincidences.) ... Have a great day wherever you are!