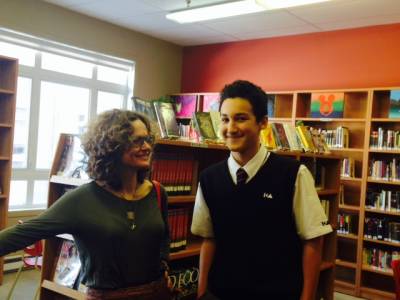 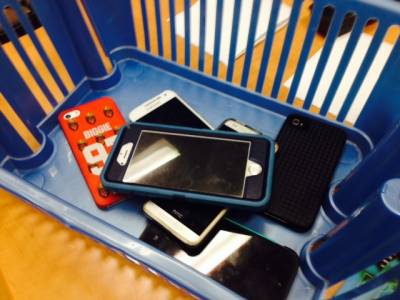 You'd probably expect a writer who just got home from doing FIVE sessions with students at Kuper Academy would be ready for a nap, but hey, I'm full of energy. I think that's because instead of tiring me out, the kids I worked with today gave me the best kind of buzz!

Okay, so you're wondering about today's pics. In the first one, I am in the library with a student named Justin. Justin had heard me speak in Miss Machaca's class, where I mentioned that writers need to be careful observers of life around them. When I finished up in Miss Machaca's classroom, I was chatting with another of her students, when I noticed that Justin was well... waiting around. So I asked him, "Do you have a question for me?" -- and he answered, "No, I'm just following one of your tips!" That was when I figured out Justin was OBSERVING! (Nothing makes a visiting author happier than knowing young writers are following her advice!!)

There is lots more I can tell you about today's visit, but I'm going to give you a few highlights. If you are one of my regular blog readers, you'll know that I have started work on a new project involving school rules. That's why I took the second pic. It's the plastic basket you find on every teacher's desk at Kuper. When students come in, they deposit their cellphones in the basket. Clever idea, no? Maybe I should get them to try it at Marianopolis College!! Anyway, it's an interesting approach to the cellphone-in-the-classroom problem... and maybe I can find a way to work it into my new story. See? That's what we writers do... spend our days collecting material, the way a bird collects stuff to build a nest.

A happy moment from my day: I was telling the students about my opa, who inspired the character of the father in my historical novel What World Is Left. I explained that during the Holocaust, my Opa had to compromise his own priniciples in order to protect his family. Then I told the class, "May the rest of us never find ourselves in a similar situation." At just that moment, I happened to look at a student named Tyus and Tyus gave me a small nod. But that nod (you may know I have an obsession with body language) showed me that Tyus is smart and has a big heart -- and that he understood exactly what I meant.

I also collect possible names for future characters. So you can imagine my pleasure when a student told me her name is Love. And she has three sisters named Faith, Hope and Peace. Love, if you're reading this, I think you need to write a story about you four sisters and whether you live up to your names. I am wondering for instance ... does a girl named Peace ever get into a fight?

Another observation: I met a student named Melina who has two pencilcases. One is for pens and pencils; the other is for other stuff like her erasers and calculator. As a writer, I am always on the hunt for interesting details ... that double pencilcase situation might make it into my bird's nest, too!

And you can imagine that I was impressed by a student named Jack, whom when I told his class that I have been writing three pages in a journal every day for 20 years (except for one day when I had a terrible flu), Jack raised his hand and said, "That means you wrote, 219,897 pages!" And Jack didn't even use his calculator to figure that one out.

I'll be doing two more visits to Kuper this month. Watch the blog for more reports.

Special thanks to teachers Mr. Welik, Miss Machaca, and Mr. D, for sharing their classes with me; to librarian Mrs. Mohammed for inviting me back to Kuper; and to my new pal, Mrs. Katz, for the excellent company during my break!