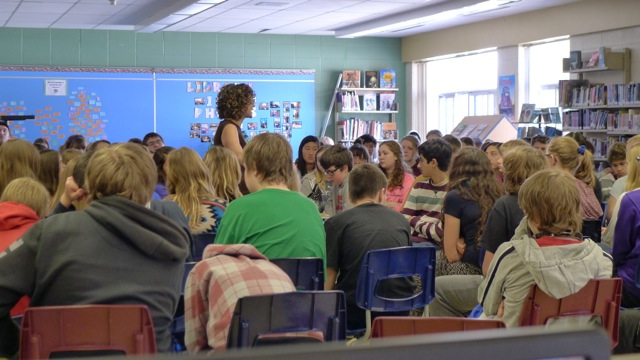 I'm just home from my morning visit to Westwood Junior High School in Saint-Lazare. I worked with nine Grade Eight English classes, and though the library got pretty packed, the students were focused and fun.

Usually when I do presentations, I talk about writing in general and make reference to lots of my books, but because these students have been studying the Holocaust, I talked mostly about my historical YA novel What World Is Left.

Because this book is so close to my heart -- it's based on my mum's experience in a Nazi concentration camp -- I could talk about it forever. I tried to give the students an idea of why I wrote the book, how I did the research, and what went into the writing process (seven drafts!!).

In What World Is Left, I describe the scene in which Anneke's father gives her a necklace for her birthday -- on the necklace is a miniature painting her father has made of their hometown. That scene is based on a real-life incident and I wore the necklace to show the students.

Afterwards, some of us got to talking about how it isn't only people who have stories, objects have them too -- as a student named Amy pointed out. Special thanks to all the students and especially to those who hung around to chat and to my admire the necklace -- I didn't get all their names, only some... Roxanne, Justine, Ali, Julia, Grace and Chris....

Thanks also to Mrs. Quinn, the teacher who helped organize today's visit, and to librarian Kathleen Conroy for making me feel so welcome. PS: Don't forget to get your grandparents' stories. And if your grandparents aren't around, borrow someone else's!