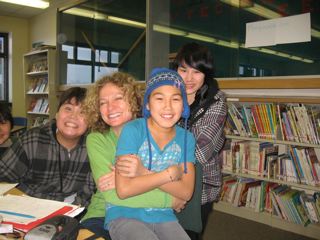 Today I am writing to you from Jaanimmarik School in Kuujjuaq. I have lots to tell you, but I cannot find some punctuation marks on this computer -- so you will have to excuse me if I don t includeapostrophes or question marks. When I get home, I promise to fix the mistakes!

So I still need to tell you more about my time in George River. On Tuesday night, there was a feast in honour of my visit. The food was OUT OF THIS WORLD! We ate soup made with Arctic char and also fish pie (for those who are interested, I got the recipe). The supper was made by Karen and some of her students -- thanks so much to all of you if you are reading this. Also, some of the students I worked with in George River in 2007 came to celebrate the publication of my book The Middle of Everywhere -- so it was a very special party for all of us!

Yesterday afternoon, I launched my book for all of Ulluriaq School in George River. It felt pretty magical to be reading my book in the community where the story is set. I have lots to tell you about what happened during the launch. First, two female students were kind of late and taking their time about joining the group, so Mark Brazeau, the principal, said: Come on grandmothers, let s go!  Of course, we all cracked up when he said that! A guy named Junior admitted he is interested in Inuit legends and I encouraged him to learn some of the old legends and to write them down to share with all of us. Also, I didn t tell you that I met Charlie -- he is a hero all across Canada because a couple of months ago, he was stuck out on the land and he killed a polar bear! After that happened, I heard the news on CBC radio, but I never expected to meet Charlie in real life! Also, a boy named Donald made a funny joke, which might show you the Inuit sense of humour. When I told the students that I hope one day my husband Mike will come with me to George River, Donald called out, Do you love George River more than your husband  Of course that cracked us up again!

I ve been working all day today at Jannimmarik, and have been having an amazing time. I know I am here to talk about my stories, but I have to admit that my favourite part is listening to students stories about their lives in the North. One boy I met is named Daniel, but his friends call him Inuk Daniel and apparently he is on UTube -- when I get home I will try to include a link to his UTube performance. Several students I met seem really interested in writing. I could tell that Nelly was interested because of the way she was holding her pencil, poised and ready to write. I asked Nelly if she is going to write stories and she answered: Maybe. I thought that was a good start. Nelly, if you are reading this, remember what I told you -- if you want to write, you need to READ AND WRITE A LOT.

My afternoon ended with the Secondary IV and V students. They told me I have been mispronouncing the name of the dog in my book. The dog s name is Tarksalik, but they say that in Inuktitut, you do not pronounce the r in that word. So, thanks guys for helping me with that. These students also did a bit of writing for me, and some of it was extraordinary. Claude wrote about how his grandfather told him not to hit his sled dogs and how that helped Claude learn to be a good man. Danielle wrote about her old babysitter who later committed suicide. Both of these stories gave me goosebumps. I was telling the students that that s how my body tells me what a good story is: I get goosebumps.

Tomorrow is a ped day here in Kuujjuaq, but I am doing a writing workshop for teachers and for interested students at nine AM. So the big question is: are they going to sleep in or come and work on their writing with me  To find out the answer, you will need to return to this blog.

Sorry about the missing punctuation. I ll write again when I can. I am so enjoying this adventure. Hope you re having fun and learning stuff wherever you are.