In Which I Meet Clever Kids -- and a Senator 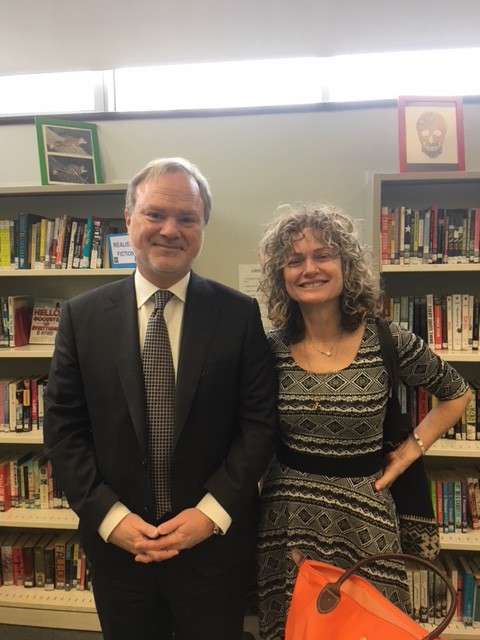 I do get to meet a lot of clever kids when I do school visits. But it isn't every day I get to meet a REAL LIVE SENATOR. I was at St. Thomas High School today for my second in a series of four days of writing workshops. Usually, I do my workshops in the library. Except today I got bumped by a senator. That's me in today's pic with Senator André Pratt, who was, for many years, the editor in chief of La Presse here in Montreal.

Senator Pratt was at the school to talk to about how the Canadian government works. I had a break during one of his sessions, so I stayed to hear him. But my favourite part of meeting him was when I asked him a question that I was wondering about during his talk: what kind of teenager did André Pratt used to be?

Well, you're gonna love his answer. (I wrote it down for you.) "I was not a good student. I was busy doing other things, such as reading a lot. In class, I asked many many questions. I still do that. That's why I became a journalist. Also, I used to be very funny."

Senator Pratt's answer should give hope to all the students out there who are not at the top of their class. Who knows? You could end up being a senator one day too! Also, did you notice that Senator Pratt said he READ A LOT. HINT! HINT! YOU SHOULD TRY READING A LOT TOO.

I worked with four classes again today. I started with Ms. Yates's Grade 8's. There were some interesting CHARACTERS in that room! (We authors LOVE interesting characters. Where do you think I get my inspiration?) A student named Matthieu was the class "commentator." When I remarked that a student named Jack is a good nodder, Matthieu said, "Our history teacher says Jack nods even when he doesn't get it!" And when I observed that a student named Angela seemed to be in a great mood, Matthieu said, "I've never seen her not happy." And it turns out, Matthieu has a story of his own. He's been suspended for skipping detentions. As Matthieu explained to me, "I don't go to detentions. It's against my religion." DON'T YOU THINK MATTHIEU DESERVES TO BE IN A BOOK?! (I do.)

Next up was Mr. Dagenais's Grade 8 group. These students were a little quiet at first, but then they livened up. I noticed that a student named Jason's right elbow was red, and that a student named Amy had a cough. I made these observations to show the class that writers need to observe stuff. (Especially writers like me, who have asthma since we're afraid to catch colds!). I wanted to learn more about what Jason did to his right elbow to make it red, but there wasn't time. There could be a story there! A student named Nathan stayed after class to ask me what my favourite book is -- why Alice's Adventures in Wonderland, of course!

Mr. Cloney's Grade 9's were zippy and had lots to say. When I asked the class whether they hate their first drafts (if you know me, you'll know that I'm all about despising the first draft... the work is in the REWRITE!!), a student named Kristin answered, "Not always." Then she added something that I thought was brilliant. She said, "Sometimes I have really good ideas and I like to stick to them." YES YES AND DID I ALREADY SAY YES?!!! That's it, exactly, Kristin! We start with an idea, hopefully a super good one, and we stick with it through the rewriting, refining process.

Now, what can I tell you about the last group of the day -- Ms. Yates's Grade 9's? Well, let's say they were what could be called A HANDFUL. I had to read them the riot act several times, and I had to separate two boys because they were paying more attention to each other than to MOI! But ... well... I still kind of liked them. I'll work with them again tomorrow morning. Stay tuned for tomorrow's blog entry to find out how that goes!! Oh, a lovely student named Costa stayed to chat and had this to say: "Some people need to beat their kids in this class." Ms. Yates overheard Costa's comment and you know what she said to me? "Write that down and use it in your blog!" CAN YOU TELL I HAD A FUN DAY?