Hello blog readers! I just finished up the last of four workshops at Laval Junior Academy. Today, I was in the library with Ms. Farrell's Grade Sevens and Ms. Milea's Grade Eights. Like yesterday, we focused mostly on writing exercises (since the students already know my writing tips!).

In today's pic, you may notice that I am dressed for a run -- that's because before I started the workshops, I went for a run with Ms. Farrell and Ms. Milea! (They're in the pic too!) Lucky me! 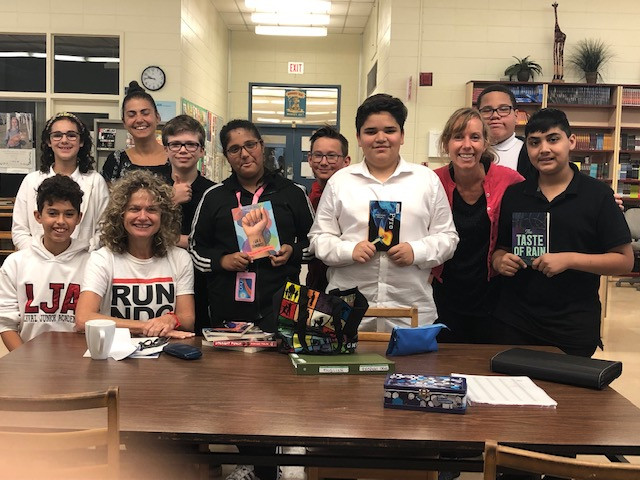 Hey, it wasn't my idea for the kids to hold some of my books -- it was their idea!

I'll start by telling you how the librarian, Ms. Venditti, told me jokingly that she has "the memory of a goldfish." I said that would make a great book title! Also, it makes me wonder -- what exactly do goldfish remember? Good book material, no?!

One exercise I tried involved starting with an ordinary moment and adding an extraordinary twist. Pravin wrote, "I am on the bus and there was a fight and the bus crashed into a tree." Great imagination, Pravin! Now add some details. Who was fighting and about what? Did the crash happen because the bus driver tried to stop the fight?

Sebastiano came up with this twist: "I'm in my living room watching the movie Batman, when the scene was over and Batman shows up." I like it, don't you?

I also asked the students to write about writing! Franco wrote, "I am tired and not in the mood for writing this morning. I'd rather be home sleeping or watching TV." Samuel wrote something which, as you will understand, was a little more to my taste: "I can't think of anything I would rather do right now."

But you know what? What Franco wrote was good too! That's because as I told the students, HONEST writing -- writing that comes from TRUE FEELINGS -- is always powerful.

Okay, thanks to the students at LJA (especially those who were on their best behavior), and to Ms. Venditti for hosting me, and to Ms. Farrell and Ms. Milea for arranging my visit -- and sharing your students with me -- and for the run!!