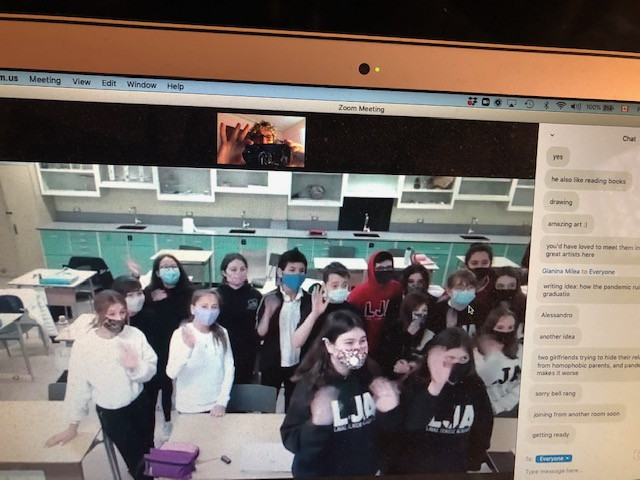 Hello hello, blog readers! Today's entry is called "Special Morning at Laval Junior Academy" -- so you must be wondering what made it special for a person like me who does a lot of school visits! Well, the back story is that when I woke up this morning, I thought, "I've got three Zoom class visits in a row. How in the world am I going to make THAT interesting?" But you know what? It wasn't a problem. Because the students made it interesting!

I worked with three of Ms. Milea's Grade Seven English classes. That's the first group saying good-bye to me in today's pic. I told them my theory that writing is like cooking -- you need good ingredients and you have to sample other people's meals, in the same way that writers need to read the work of other writers. When I asked if any of the kids like cooking, a student named Alessandro said he did. So, being me, I bombarded him with questions! Here's what I learned: Alessandro knows how to make homemade pasta. And he learned the recipe from his nonno, which is Italian for grandfather. "So," I asked Alessandro, "why do you think I read other people's books?" Not surprisingly, Alessandro figured out the answer. "To get tips!" he said. Exactly! I was also telling the class that it helps if a writer is CURIOUS. If I hadn't bombarded Alessandro with questions, I might never have learned about how his nonno taught him to make pasta -- which I think is pretty cool.

Heracles, one of Alessandro's classmates, told me, "I am writing a comic book and I'm planning on publishing it." Excellent news! I told Heracles that one day, I want to take a course on how to write a graphic novel, since it requires a different set of skills than writing a novel-novel. Ms. Milea told me that Heracles is one of several students in her class who are gifted artists. Get going on those graphic novels, all of you!

The mood was completely different in my second group. Many of the students had read my books and they had tons of great questions -- so I spent more than half the period answering those questions. Also, becaue we had some technology glitches, we lost some time at the beginning. I was trying to start speaking even though Ms. Milea told me to be patient. So I cracked up when a student named Kaylen walked up to the computer screen and told me, "M'am, you gotta wait a bit!" Hey, Kaylen, I guess you aren't used to people like me -- ones who are bad at waiting!!!

A student named Alex wanted to know where I read and write. The answer for both was "pretty much anywhere." Many wanted to know why Auschwitz concentration camp was worse than Theresienstadt, the concentration camp where my mother was imprisoned for three years. So I explained that though many prisoners died in Theresienstadt, there were no gas chambers the way there were in Auschwitz. These were difficult things to talk about, but the students wanted to know, and when I checked with Ms. Milea, she felt that they were mature enough to handle the information.

I'd already met my third group -- so this was our second visit. I'd left them with a writing prompt -- to write about their experience of living through the COVID-19 pandemic. What's been hardest? What's been good? So several students came up to the screen and read me their work -- which made me super happy! You'll understand why when I tell you a little more about what they come up with.

So here goes. In each case, I asked the student's permission to share a line or two from their stories.

Emma wrote about seeing her grandparents after a long time. It wasn't until the moment she saw them that she "realized how much I missed them." I thought that was a beautiful description, and I asked Emma if she'd let me borrow that feeling for a pandemic story I am planning to write over Christmas. She said yes! Thanks, Emma! And keep working on your own story!

Anthony wrote about going to the airport with his parents, who had told him they were picking up boxes from Greece. Only the boxes weren't boxes; they were Anthony's grandparents! "First I saw my Grampa, then my Gramma," he wrote. Cute story, no? And you can tell that Anthony has a fun family!

Kelly wrote about her family too -- how her mother has been working hard during the pandemic, and how Kelly's big brother had to have surgery following a sports injury. Kelly's mom bought Kelly's brother a bell to ring when he needs someone to bring him something. "Now I get to spend time with him," Kelly wrote. "I'm his little sister -- and little servant." Which cracked us all up -- and made me remind the students to use humour whenever possible in their stories.

A student named Giada wrote about missing her Grade Six graduation: "It's a moment we'll never get back." I found that line heartbreakingly beautiful! Keep writing, Giada! We need your story!

I'll end with Calvin, who wrote about not minding the pandemic so much at first because, "I had myself to talk to." Fun! I told Calvin I think he should write a story about the conversations he's been having with himself. I'd definitely want to read it!

So now you know why my day was happy. So much fun to tell stories and hear stories and be inspired by each other. Thanks for another great day at LJA. Thanks to the kids for working hard, and to Ms. Milea for the invite -- and for sharing your kids with me!