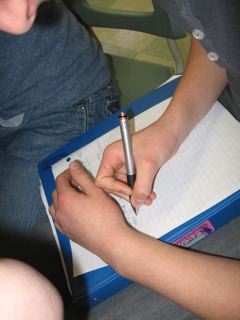 Hello, hello! Today I had fun with more teenagers -- I did two writing workshops at St. Thomas HighSchool in Pointe-Claire. First, I worked with Miss Murphy's Grade Nine class, and at lunchtime, I did another workshop for students who wanted to learn more about the world of writing for kids.

During the writing portion of the workshop, I again asked students to write about some mistake they'd made in their pasts. (I invented this exercise yesterday at Lake of Two Mountains High School and I was eager to test it out again.) I explained to students that they would not have to share their work  -- that the goal of this exercise was simply to write freely and see what ideas came up for them. While they were working, I warned them I'd walk around the library (where the workshops were held), but that they could hide their work if they didn't want me to read it. Several students took advantage of this option -- and in today's pic, you can see the hands of a young man named Zander hiding what he came up with. Personally, I was thrilled to see students hiding their work: it means they were up to something interesting, and worth hiding! Those are always the best stories, though eventually, when we become published writers, we'll have to let the whole world see our work!

With the lunch bunch, I talked a little about letting our characters' characters determine the plot of our stories. We talked about "foils" -- characters who have opposite traits, thereby reflecting one another. It turned out there were two such characters sitting around the table: Vanessa, who's in a band and could be described as kind of tough; and Sabeta who told us she has never said a swear word in her life. I suggested that interesting things might ensue if a writer put two characters like Vanessa and Sabeta together, say in an elevator that stopped working.

So thanks to librarian Carolyn Pye for inviting me to St. Thomas High School and to the kids for being so receptive, and a special thanks to those brave souls who turned up on their lunch hour to work on their writing!