The Boy in this Picture is Not Sleeping! 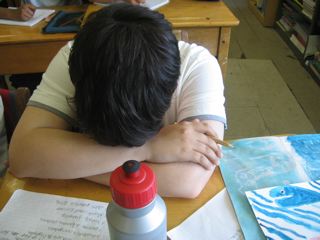 Just so you know... the boy in today's photo is NOT SLEEPING! He is THINKING OF AN IDEA FOR ASTORY! The boy, by the way, is Mathieu and he wants to explore another galaxy in his lifetime!

Mathieu is one of the students I worked with again today at Parkdale School. Because this was my second day visiting Miss Linda Shetzer's class, there was lots of time for writing exercises. During this particular exercise, Mathieu was imagining a character in a difficult situation.

Earlier in the day, we did some work on developing interviewing skills. I asked students to pair up and ask their partners to tell them about the most difficult things they had ever experienced. (I made the point that difficult situations make far better stories than easy ones!)

Those interviews led to some pretty amazing stories! One student (I'm going to use initials here only) named "A" told us about how her parents have split up and then gotten back together four times. I thought this would make a great book, especially if it was told from the child's point of view. Another student named "D" told us how she had to go to court when her parents got divorced. "D" said she still remembers the sound of the judge's gavel when it hit the table. Now that's an example of something really important about writing -- you need to come up with GREAT DETAILS. When "D" described the sound, she took us to the courtroom with her. Which is exactly what writers have to do -- take us places and introduce us to new people.

So that marks the end of my school visits for this year... I'll miss being in classrooms, but I do look forward to some quiet time at the computer. And I hope my friends at the many schools I've visited this year will stay in touch -- and that I'll also hear from some of my own students. Best wishes to all of you for a great summer with lots of time to do the things you love.