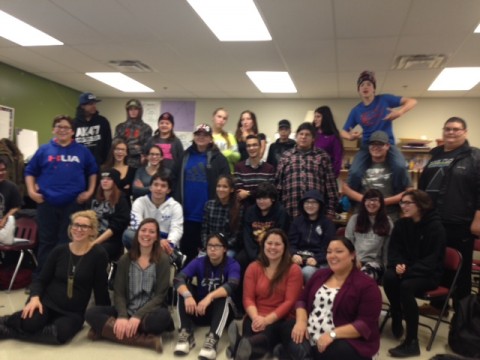 The Moniques are back in action! That means this Monique is teamed up again with her dear pal, photographer extraordinaire Monique Dykstra! This winter, we're working with four grade nine classes at Kahnawake Survival School, helping them to produce a chapter in this year's version of Quebec Roots. The project, which aims to help youngsters across the province tell their stories through words and photographs, is sponsored by the Blue Metropolis Literary Foundation.

I'm always the one who goes first. That's because -- let's be honest -- the students tend to be a lot more interested in learning about photography than writing. So Monique Dykstra is their reward after they've worked with me!

One of our goals today was to help the students brainstorm to come up with a topic for their chapter. That exercise went super well. The students had several good ideas including the prevalence of guns in their community, as well as depression in their community. But the topic that was by far the most popular had to do with the creation of their school and how it was a response to Bill 101, which limited students' eligibility at English schools. Many of the students know people who were involved in the walk-out that led to the creation of Kahnawake Survival School nearly 40 years ago.

Though I have heard Monique Dysktra do her photography workshop before, I always learn something new when she works with young people. Today, for instance, she told them, "Building a photo is like building a house. You need to start with a good design." That made me think about writing too -- and how having an outline (or in building terms, a blueprint) can help a lot!

A student named Kiana wanted to have a look at my historical novel, What World Is Left -- and next thing I knew, she was busy reading it. Later she told me, "I look forward to the writing. I like writing -- but for myself." That is something for you to think about, Kiana -- are you ready to write for others? When I start out, I am always writing for myself -- but the longer I work on something, well, the more I want to share it!

A student named Gary made me laugh when he told me that when he heard we were coming this afternoon, he wanted to skip class! But luckily, he didn't because he said, "You got me excited about writing!" YAY, Gary! He also recommended a book called Spirit Bear by Ben Michaelsen. I'm going to order a copy!

And I was impressed by a student named Luna who took a creative approach to our topic. She suggested that someone could write about what the world would have been like if their school was never created. "Maybe I wouldn't have even been here," Luna said. I think that would make a great addition to the chapter, Luna -- and perhaps a perfect concluding piece.

So big thanks to the teachers -- Jocelyn Dockerty, Heather White, Krissy Goodleaf and Christie Chandler -- for sharing your kids with the Moniques -- and to the kids for being so positive and attentive. See you bright and early on February 3 -- until then, start interviewing folks about their memories of their old high school and the walk-out... and of course, take lots of photos!