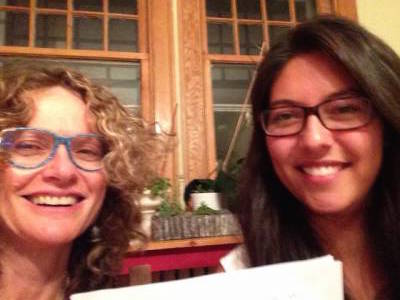 I am just home from a happy visit to Royal Vale School, where I worked with Mrs. Frank's two Grade Five English classes. (That's me with students from the first group in today's pic.) When I first meet students, I always ask, "How many of you enjoy writing?" -- but I have never had so many answer "Yes" to that question. In the first group, 20.5 students out of 24 said they enjoy writing. (The .5 reflects one young man who could not quite decide!)

We talked about some of my favourite subjects such as trouble and secrets. When I suggested to the students that they try to uncover their grandparents' secrets, a student named Imani gave me a great big smile. (Imani is standing next to me in the pic, wearing a grey sweatshirt.) Later, Imani told me she and her grandmother Alanna are super close and that she happens to be seeing her grandmother later today!

I told the students how I am always on the look-out for interesting material. Two students in the first class reported that their grandparents live downstairs from them. I thought that would make great story material.

I gave both groups a writing exercise that required them to access an old memory. This is how a student named Alex started the piece he wrote afterwards: "One day, I forgot to close the birdcage and my bird flew out." As I told Alex, this beginning really caught my attention -- and makes me want to know what happened next. Hey, Alex, finish that story -- and though you've started with a real-life memory, you might consider changing things up to add even more drama -- though I do hope there will be a happy ending.

At recess, a student named Lily told me her dream is to become an author. When I asked her what she learned from my visit, her answer made me laugh: "I learned basically everything!" I don't know if I taught you everything, Lily, but you sure made my day.

One of the students in the second group has the coolest name: Vegas. I asked him if he is named after Las Vegas -- and if perhaps he was conceived while his parents were on a trip to Vegas. It turns out he is named after another guy named Vegas. You see, there I was again making up stories!

Special thanks to Mrs. Frank for sharing her classes with me, to Miss Michelle, the student teacher, for participating in the writing exercises and being such a great role model to the students, and to Mr. Timpano, the vice-principal, who helped get my visit organized. I'll end today's blog with something Mrs. Frank told me when we were talking about the importance of re-writes. She shared a line she heard on the reality TV show 19 Kids and Counting: "Practice doesn't make perfect; practice makes progress."

It was great to start my day with you guys at Royal Vale. Here's to practice and progress and writing and reading!