I spent most of today at Beaconsfield High School, where I visited Melinda Cochrane's Grade Seven classes. Ms. Cochrane's students had all read What World Is Left and they had prepared some really terrific questions for me. Though I have presented the book to older audiences, I don't think I've had such thoughtful questions from any other group. One of my favourite questionscame from Tyler, who wanted to know, "How did you make such a sad story into a really good book?" I explained that I think sad stories or stories about difficult situations make the best stories (who wants to read about someone's perfect life, right?). But I also told Tyler that I tried to lessen some of the sadness in the book by telling about the ordinary teen experiences of my narrator, Anneke -- for instance, she remembers getting her period, and she experiences romantic feelings for the first time.

I also struck a rather interesting deal with a student named Shanel. Shanel said she doesn't really enjoy writing. "I don't think I'm good at it," she added. But Shanel looked interested when I pointed out that no matter what kind of work people end up doing, some kind of writing is usually required. Shanel told me afterwards she wants to be a police officer. "So I might have to write reports," she said. So here's the deal we struck -- I told Shanel that if she writes half a page in a journal for three months, I guarantee that her writing will improve. Shanel thought that was worth a try -- so she told me she's going to get herself a journal and start it tomorrow. (I think I helped give her that idea because I showed the students the journal I write in every morning.) Shanel is going to officially start this experiment tomorrow, on March 29, 2009 -- and she's promised to check in with me before June 29, 2009 to tell me how things are going. I suggested writing five times a week might be enough, but Shanel didn't think so. She's going to try and write that half-page every single day. So here's to all  you young writers, out there. Anyone else up to taking the same challenge as Shanel? (Oh, here's a pic of me and Shanel -- and my trusty journal!!) 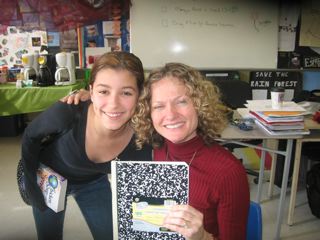