Happy to Be Back at Crestview Elementary 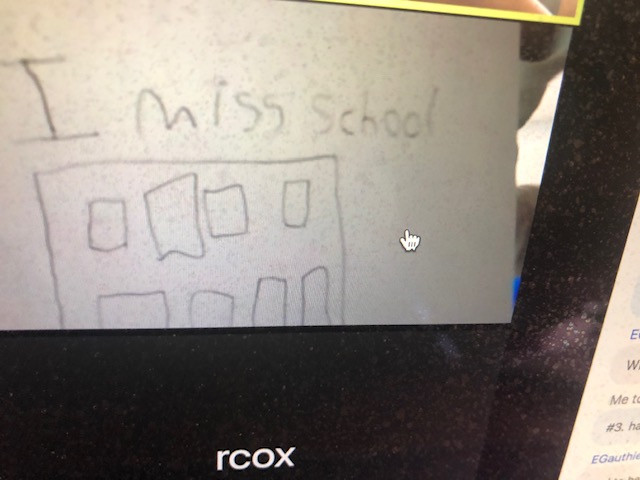 The students I’m working with range from first to sixth graders. And guess what? I decided to use some of the same writing exercises I’ve used with my seventeen and eighteen year old students at Marianopolis College! I simplified the language and concepts of course... but something I’ve observed is that it’s sometimes easier for younger students to use their imaginations than it is for older ones. Maybe the trick for us older writers is to hang out with kids like the ones at Crestview, or to return to our childhoods through the use of memory.

One exercise I did with the classes was for them to imagine being in a bookstore and coming across the book they most want to read. It’s an exercise inspired by an interview I did with Sophie Kinsella, author of the Shopaholic series. When I asked Sophie (her real name by the way is Madeleine Wickham) how she came up with the idea of writing the first Shopaholic book, she told me: “That was the book I wanted to read!”

In another exercise, I asked the students to remember a moment from the pandemic. Cameron came up to the screen to show me what he had written about his pandemic memory: “I miss school.” He also drew a picture of his school. (You probably noticed that I used Cameron’s little story to illustrate today’s blog.)

Marie Soleil wrote, “I play happy.” I liked the sound of that sentence. So I suggested another kind of WHAT IF? What if “I play happy” is the first in a series of books? We could also have “I play nervous,” “I play excited” – and the students suggested two more ideas: “I play mad” and “I play funny.” (“I play funny” is my new favourite!!)

The Grades Four and Five students had great ideas too. Andreas explained, “Because I’m Orthodox, I’d like to read about the life of Jesus.” I suggested maybe Andreas could write a story about Jesus during the pandemic. Arsalan wants to write about Lebron James. “What if,” I suggested, “Lebron James turns up at Crestview? Or what if he’s driving your school bus?”

I was very touched during the second exercise, when Alex shared his pandemic memory. He remembered not being able to see his grandparents and having to attend on-line school. “It was too hard,” Alex wrote. Those are four simple words, but put together, they carry a lot of punch, don’t you agree? I had told the students that the best writing comes from our hearts, and I felt like those four words came straight from Alex’s heart. Nice work!

I ended the afternoon with the Grades Five and Sixes. That was when I met Hope and Bella. I bet you think those are names of kids. But nope! Those are names of dogs. Hope is a black lab, who is a service dog at Crestview. Bella is a golden lab, who is a service dog in-training! I think it would be amazing to read stories about those dogs and their adventures. Bella, by the way, was sound asleep when I met her. Apparently, she'd spent lunch hour playing with Hope. Miss Mary's class came up with a great story idea: "What if a happy dog named Hope gets lost?" Excellent use of the "what if?" technique, kids! I also met a student named Sebastian who came up with the idea of writing about what might happen if he didn't return a toy a friend had dropped. Sebastian had other ideas too, which is why I told him, "Sebastian, you are an ideas factory!" And you know what? Writers needs to be ideas factories!!

I'll be back for another virtual visit at Crestview next Thursday. The plan is for the students to continue working on the writing exercises they started today. That's because writing requires hard wiork and lots of RE-WRITING! Special thanks to Ms. Farrell and Mr. Adams, for organizing my visits to Crestview; to the teachers for sharing your students with me; to ELAN's ArtistsInspire program for making my visits to Crestview possible; and a special thanks to the kids (and the dogs) for being WONDERFUL!!