Holocaust Symposium and a Radio Interview 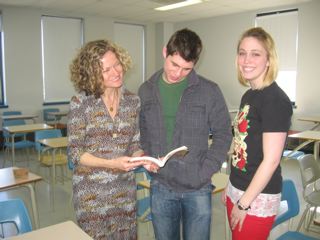 My, my, it's turning out to be another interesting day! First thing this morning, I participated in the 16th Annual Vanier College Kleinmann Family Foundation Holocaust Symposium, where I spoke to Marcia Goldberg's "Short Story" class about What World Is Left. SinceI had nearly two hours, I was able to discuss the book and the story behind it in some detail. Afterwards I got to talk to a few students, and I hope others may get in touch via this blog. Dustin (that's him in the photo), who's 19 and in the Music & Science program, seemed especially interested when I talked about the writing process. He told me, "It sounds lame, but I like words." I love to hear stuff like that, Dustin! Dayna, who's 18 (she's also in the photo) and in Communications, knew what I was talking about when I discussed the importance of re-writing and re-writing until whatever you're working on sounds as close to right as possible. Dayna has also studied photography and has spent hours on a single photo shoot. Dayna said, "When you look at the final product, you see all the work you've done and you appreciate it." That should inspire all of us writers to keep re-writing!

Special thanks to Marcia Goldberg, for inviting me; to Neil Caplan, who organizes the symposium, to the Kleinmann Family Foundation for their amazing work in Holocaust education, and also to my friend Donna T., who teaches at Vanier, and whose smiling face I saw when I looked up and began my talk!!

After Vanier, I whipped over to the Westmount office of CFMB radio, where I was interviewed about my upcoming participation in next week's Blue Metropolis Literary Festival and also about What World Is Left. I was interviewed by Lisa Winston  -- I went to school with her brother, and she went to school with my brother, so we had a little catching up to do in addition to the interview! Lisa's show Chai Montreal airs on Sundays at 1 P.M. Listen for it at 1280 on your AM dial. The interview about What World Is Left airs on April 26th....

One more thing, also radio-related. I heard a terrific CBC interview today with Montreal legend, poet and singer Leonard Cohen. Cohen was talking about reading poetry by his late friend, another Montrealer, Irving Layton. Cohen said Layton's poetry provides "information the heart wants." I think that's the most beautiful thing I've heard today. Information the heart wants. Now I did like what Dustin had to say about liking words, and what Dayna had to say about "seeing all the work" you put into something.

I'm off to see my own students now, hopefully to give them a little of the information their hearts want!