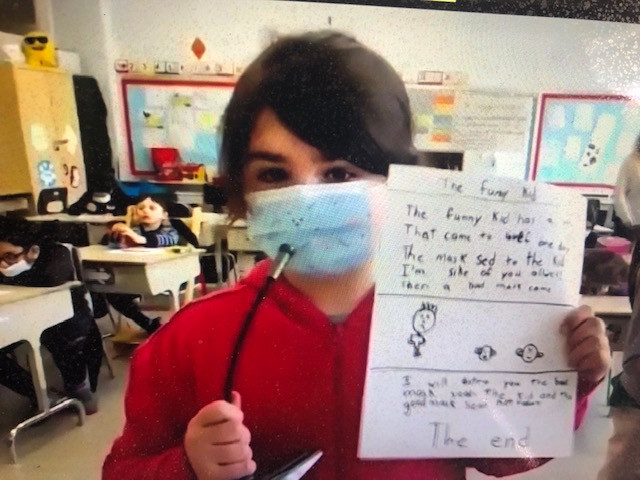 Hello, hello, blog readers! I’m feeling happy because I just had a super fun day with students from Grades One to Six at Crestview Elementary School. It was my third virtual visit to Crestview -- which meant that today, we focused less on writing tips, and more on the students’ writing.

That’s Ioanna in today’s pic. A Grade Two student, Ioanna came up with a great story about a talking mask! I had explained to the students that good dialogue adds life to a story. Ioanna’s mask says, “I will destroy you!” I’m sure you’ll agree that’s good dialogue! Also, I love the idea of a talking mask! I have to add that Ioanna stole my heart when she told me, “When I grow up, I want to make a dozen chapter books.” Then she added, “I’m going to write another one right now!”

Some of the Grades Three and Four students had used my writing prompt about remembering trouble during the pandemic. Maria Simone wrote about fracturing her collarbone. “I couldn’t play roughly with my brother,” she wrote – which I thought was an excellent detail. (Another thing we discussed was the importance of including memorable details.) I asked Maria Simone how she fractured her collarbone, which is how I learned it happened when she was sliding and another kid bumped into her. Maria Simone said the kid apologized, but that his dad was “kind of rude.” It’s too bad, of course, that that happened in real life, but the good news is that IT MAKES AN EXCELLENT STORY. GET THE RUDE DAD IN YOUR STORY TOO, MARIA SIMONE!

Peter wrote a story called “Berlik the Bunny.” I adore the name Berlik – and Peter, I’d like to read the whole series. Maybe Berlik will be as famous one day as Peter Rabbit!

Asna told us her favourite book is Dr. Seuss’s The Cat in the Hat. Which made me suggest that maybe Asna could write her own version of the story – in which a wacky visitor turns up at her house and causes a lot of trouble. I explained that in a way, all stories are inspired by other stories. That led Maria Simone to ask a brilliant question: “How did the first person create a story?” I’m afraid I had to admit I didn’t know the answer! But you know what would make an amazing story? A story about the first person to tell a story!

The Grades Five and Six students blew me away with their stories and story ideas. Kaylee wrote about a nineteen-year-old girl named Sarai who wants to move to her own place, but her mom “has some concerns.” Here, I suggested that instead of TELLING us the mom has concerns, Kaylee could try SHOWING us the mom’s concerns. Kaylee could even use dialogue to show us! Konstantinos read a beautiful story about his dad coming home and announcing sad news. I told Konstantinos my theory – that it takes courage to be a writer, courage to remember difficult things – and that writers often use their memories of difficult things in their stories. Get to work, Konstantinos! Luna, Jason and Minas cracked me up with their stories. Luna and Jason wrote about the care dogs in their classroom. Minas’s story is set in the year 2168. It’s about an inventor named Julia who was “tinkering with an atomizer. Atomizers,” Minas wrote, “can be very dangerous.” That cracked me up! (I also adore the word “tinkering.”) I told the students  it’s harder to make readers laugh than to make them cry – and that they should definitely continue to write humorous material if they have that gift.

So now you know why I had such a fun day with the kids at Crestview. Many thanks to their teachers Ms. Elise, Mr. Corey, Ms. Sandy, Ms. Ruth, Ms. Marta, Ms. Connie, Ms. Mary, Ms. Bella, Ms. Melissa and Ms. Christine for sharing your classes with me over the last couple of months. Thanks to Ms. Farrell for the invite, and to vice-principal Mr. Adams for making my visits happen. Thanks also to ELAN’s ArtistsInspire program for your support.

To the kids … thanks for being fun and wonderful and talented and working hard. I can’t wait to read your books one day soon!