May 19 Posted by Monique Polak in Uncategorized 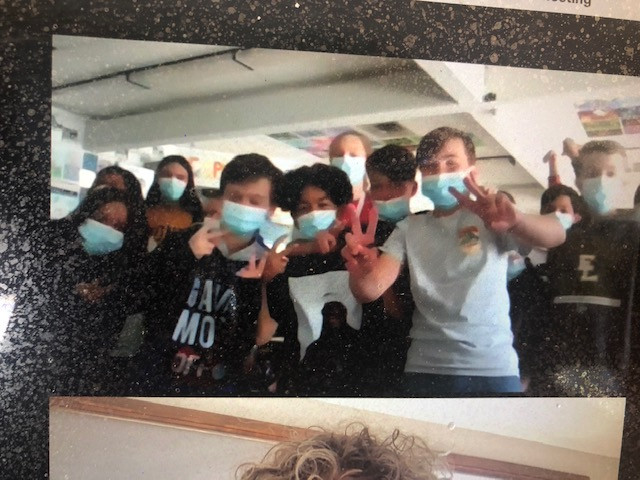 In today's pic, you will meet some of the students I worked with this morning at Ecole de la Source in Mascouche. (You will also see the top of my mop of hair!!)

I was "at" Ecole de la Source to work with Ms. Manon's English-as-a-Second-Language Grade 6 class. (Last week, I worked with one of her classes at Ecole Jean-Duceppe -- Ms. Manon is a busy teacher with students at two schools.)

These kids are studying the Holocaust, with a particular focus on Anne Frank -- so while I shared my usual writing tips, I focused mostly on what I learned about the Holocaust while I was researching and writing What World Is Left, a historical novel based on my mum's childhood experience in a Nazi concentration camp called Theresienstadt.

I told the students my view that I think we learn much more from one person's story than we do by studying statistics. For me, that helps explain why stories matter so much, and why it is our responsibility to share stories!

The students have been writing their own fictional stories about Anne Frank -- so I gave them a few suggestions for improving their work. These suggestions included USE DIALOGUE TO ADD DRAMA; DEVELOP SETTING; CONSIDER INCLUDING A CHARACTER WHO CAN ACT AS A FOIL TO YOUR MAIN CHARACTER, AND INCLUDE SOME (BUT NOT TOO MUCH!!) SENSORY DETAIL.

There was time at the end for a few questions. Mathias wanted to know if I'm planning to give my monkey man charm (it's a gift my mom received at Theresienstadt on May 24, 1942, for her 13th birthday) to my daughter. I told Mathias I'm not sure -- perhaps the monkey man charm belongs better in a museum. Eliott wanted to know what happened to my dad during the Holocaust. I explained that my dad is only half-Jewish, and that he was sent to live on a farm during the Nazi occupation of the Netherlands. But Eliott's question reminded me of something important -- I need to try and get my dad's story too.

May 24 is coming up in a few days. A woman my mum didn't know gave my mum the monkey man charm. I like to imagine the woman's face if she could have known that very close to 79 years later (minus five days), the little girl's daughter -- who by then would be 60 years old -- would be telling students in Mascouche, Quebec, the story of the monkey man and the woman who gave it to my mum. I think the woman would have been pleased, don't you? See what I mean about stories mattering?

Thanks to Ms. Manon for the invite to Ecole de la Source. Thanks to the kids for being good listeners (at least as far as I could tell!). Good luck with your stories!