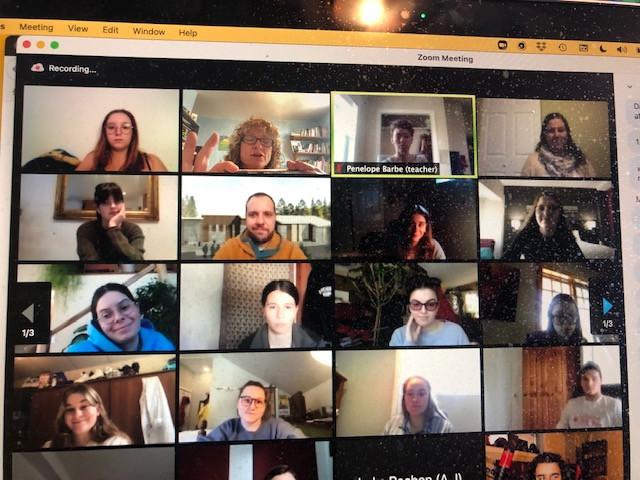 Okay, so I didn't really GO to Mont-Tremblant this morning, but I was there in my heart and soul! That's because I did a virtual visit with Amanda Juby and Penelope Barbe's English classes, as part of the Colloque du Centre collégial de Mont-Tremblant. Sociology prof Alexandre Laplante, coordinator of the colloquium, invited me to present. (That's Alexandre, second from the left, in the second row from the top of today's pic. Amanda is at the top right, and Penelope is in the Zoom box next to her.) I've been to CCMT before, so that's how I know Alexandre -- but Amanda and I go WAAAY back to Nunavik. In fact, I think I met Amanda's dog before I met her!!!

Anyway, I have to admit that this morning I was thinking I'm getting a wee bit tired of Zoom visits, but almost as soon as I met the classes, I started to buzz! Also, I was touched and amused by Amanda's introduction, during which she compared me to "a curly-haired Pokemon," explained that I'm a "bagel deliverer" and told the students, "You'll want to chat with her longer because she's a passionate collector of stories." THANKS, AMANDA! EVEN TYPING THAT NOW MAKES ME FEEL HAPPY ALL OVER AGAIN!

The students were A-MAZING. Most of them are French speaking, so at the beginning, Penelope asked me to slow down a little. But I have to admit, I got pretty excited talking to the kids, so I'm afraid I started speeding up again -- but I think by then, the students were used to me! We talked about a TON of stuff. I covered my usual writing tips, but because we had most of the morning together, I also explained how some of the trouble I experienced both as a kid, and later as a young woman, have fueled my stories. "Trouble," I told them, "made me a writer."

And even if it was a Zoom visit, I feel like I got a real sense of the students. When I was talking about how I always hate my first drafts and despair that I am not a better writer, I saw a look in a student named Aneska's eyes that told me she knew exactly what I meant. And I was right! Later, Aneska asked me, "What is the story behind your book The Taste of Rain?" Not only did I tell Aneska the story (the book was inspired by my editor Sarah Harvey, who was listening to a radio documentary about a prisoner of war camp in China), I asked Aneska whether she had used the term "What is the story...?" on purpose. That's because a little earlier, I'd told the students that that is a question that always runs through my mind. Aneska said no, she hadn't asked the question that way on purpose. Anyway, it's a small thing, but it made me happy that Aneska thinks like a writer.

The students had loads of excellent questions. In fact, they kept me busy well into their (and my) lunch period! Rose asked a brilliant question: "How are you able to elaborate on heavy topics while keeping your stories kid-friendly?" The answer came to me while I was answering Rose's question! If you write in the first person (as most kids' writers tend to do), then you will stay true to the voice and feelings of your narrator -- and even if you write about disturbing topics such as violence or abuse, you will see and feel them from a child's point-of-view. I also warned the students never to talk down to kid readers -- because kids are super smart, and they'll know! Luka wanted to know what books inspired me to write -- oddly I suddenly thought of all the poetry books I loved as a kid (one is still on the shelf here, next to me). I asked Luka what books inspire him to write, and he answered, "I read a lot of mythology." I suggested that maybe he could try taking a mythological story (say Hercules) and tell it from a modern perspective -- Hercules during the pandemic at Mont-Tremblant?!

I have to write about a few more great questions. Angelica (if you know me, you'll know I have a special fondness for that name!) wanted to know what inspired me to become a teacher. Hey, no one ever asked me that before! I explained that I've wanted to be a teacher for as long as I've wanted to be a writer. And I think the impulse is the same -- to share with others, and maybe make their journeys a little easier. I asked Angelica whether she wanted to become a teacher, and she told me something super cool, "I used to want to be a teacher. Now I want to be a detective." Ah ha! I love that! Detectives also hunt for stories!

So even if I didn't get to visit Mont-Tremblant today, I feel like I did. Funny how we all long for connection -- perhaps more than ever during this pandemic. My heart feels very full thanks to the students I worked with today at CCMT. Thanks to all of you, and thanks to your profs Alexandre, Penelope and Amanda. Thanks also to UNEQ's Writers in Cegeps program for making today's virtual visit possible. Now... a special hug for someone who was with us in spirit -- Lorna Irons. Lorna was babysitting Lola, Amanda's dog, when Lorna rescued me on the streets of Kuujjuaq. It's a crazy, wonderful story -- but it'll have to wait for another visit! It's time for me to sign off. It's a balmy 13 degrees in Montreal and this writer is heading out for a walk with her friend!