May 17 Posted by Monique Polak in Uncategorized 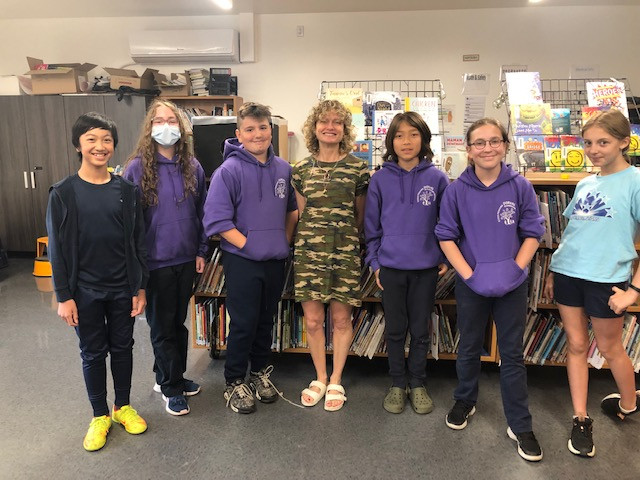 Students at Dorval Elementary School recently won the Lester B. Pearson School Board competition Qui Lira, Vaincra. (The runners up were Birchwood and Margaret Manson Elementary Schools.) For the competition, participating students had to read 13 books en français and answer questions about them in public, under a lot of time pressure. No easy feat!

What, you may be wondering, do I have to do with all this? Well... I'm the prize. (Haha, I think the only person who really ever thought I was a prize was my mum, and she didn't think so always!) Anyway, Madame Campeau, a pedagogical counselor at the LBPSB was the one who came up with the idea of making me the prize. Which is why I did a writing workshop this morning for about 50 students -- mostly Grade Sixes, and the Grade FIves who were on the winning team -- in the library at Dorval Elementary School.

I know it's about the kids learning a lot and having fun, but I must admit I had a lot of fun too! I did my woirkshop in French, and told the students to go ahead and correct me if I made mistakes. Either I didn't make many mistakes or they were too polite to correct me, because it was mostly me saying, "is that a le or a la word?" I did laugh when I was talking about the meal we eat at around six PM -- I tend to mix up the French words "souper" and "diner" -- so I asked (In French) "What do we call what we eat at six PM?" and a student named Liam called out, "PIzza!" Good one, Liam! Thanks for cracking me up -- and your classmates too!

I shared as many writing tips as I could and told a couple of stories to demonstrate how trouble helps move a story forward. Then we moved on to a writing exercise. If you know me, you'll know I'm obsessed with memory. In fact, I'm even working on a non-fiction book about memory! Anyway, I had the students remember a moment from when they were five -- and write about it. Several gave me permission to share what they came up with... so here goes!

A student named Elisabeth wrote about how she shares her birthday with her Uncle Chris: "We were eating cake and he shoved my face in my piece." That makes a dramatic moment for sure. I suggested to Elisabeth that she write a story about a niece who gets even with Uncle Chris!

Jacob wrote about his memory of his class's "Build-a-Bear." I love the idea of a Build-a-Bear -- and Jacob added an excellent drawing of the bear to his piece of writing.

Madeline wrote about her memory of learning about her grandfather's death. Her mom was the one who broke the news. Madeline remembered her mom saying, "He would want me to be happy, and that the pain was relieved from his fighting for his life from cancer." That powerful line made me feel a wave of affection for both Madeline's grampa and her mom too.

Sierra wrote about smiling when she saw her mother waiting for her: "My cheeks feeling like they wanted to explode." I can't tell you how much I love that line -- it's so playful and creative and gives us a perfect understanding of Sierra's love for her mom.

Adelka wrote about a moment in which she defied her mom. (Hey, now that I think about it, we had a lot of mom-related memories today!) Adelka included her mom's words to her, "Don't slide." But five-year-old Adelka was not about to listen. That moment of defiance makes such an interesting story, and is especially interesting when told from a five-year-old's point of view (or the now eleven-year-old).

Next week, I'll visit Margaret Manson Elementary School by Zoom, and I'm still waiting to arrange a date for my virtual visit to Birchwood. Thanks to Dorval Elementary teachers Madame Danielle, Mrs. Mastocola and Ms. Ines for sharing your students with me. Thanks to Madame Campeau for choosing me to be the prize. Thanks to the kids at Dorval Elementary for being "formidable" et fun! You guys were MY prize today!