My book The Middle of Everywhere, which is set in Nunavik (did I tell you I'm heading back there on Tuesday morning?!) did not win the 2010 QWF Prize for Children's and YA Fiction. The prize went to a delightful book called Rough Magic by Montreal author Caryl Cude Mullin. That is Caryl at the centre of today's pic. I know her book is delightful because I'm reading it. It's a fantasy inspired by Shakespeare's play The Tempest. Also up for the award was Catherine Austen (she's wearing the black and white checkered dress) for her wonderful book Walking Backward. I encourage you to read both these books.

After the awards gala on Tuesday night, several friends came up to me and offered their condolences. But I explained -- and I really meant it -- that I was honoured that The Middle of Everywhere was nominated for this prize and honoured, too, to be in such fine company!

It's normal and probably healthy, too, to feel competitive. But one thing I do believe: there is endless room for talent. I also believe that by supporting talent in others we nurture our own. Well, that's more than enough wisdom from me for one day, isn't it? Time now to get back to my latest manuscript! 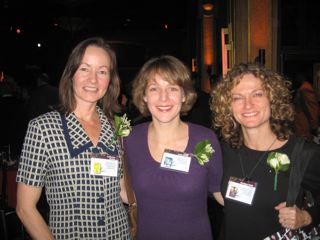