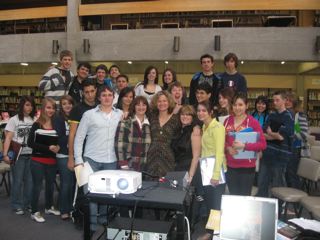 I spent part of today at Heritage Regional High School in St. Hubert, working with students in grades eight through eleven. I must say these were, for the most part, really well-behaved young people. Some of the credit must go to English teacher Mary Eva, who organized today's visit, and who seems to have a great rapport with her kids. In her introduction, Mrs. Eva told the students, "You know how you sometimes complain that I'm too lively in the morning? Well Monique Polak is even livelier!!"

The morning group did a little writing, which seemed to go well. Also, there's nothing we writers like more than to be around other people who are writing. When students are writing, I get this feeling that all is well in the universe -- though I know that that's a bit of a stretch.

Several students stayed to chat at lunch. Christine, who's 17, and has a very cool "tattoo" (which turns out to be drawn on her temple with eyeliner; she does one fresh every morning) told me she is working on a story about a vampire named Sultana. Christine has written 28 pages in the last two months. I told Christine this is exactly how writing a book works -- you show up on the page and keep going. Of course, she knows there'll be re-writing to do along the way.

When Carissa, who's 14, told me she couldn't stay too long because she had a detention, I got curious. "What did you do?" I asked, hoping for a juicy story (all writers hunt for juicy stories). To be perfectly honest, I was a little disappointed when Carissa told me she'd been late handing in an assignment. Not that juicy! Still, a student with a detention is a good jumping-off point for a story, no?

I also talked to Bobbi-Jo, who's 15, and who wanted to show me a poem she had written called "Night Slave" (love the title, Bobbi-Jo). I asked Bobbi-Jo's permission to let me quote the first line of her poem, which I think you'll like, too. It starts: "Sun sets". Like I told Bobbi-Jo, I think the fact there are two words instead of just one in that line adds to its power ("Sun sets" versus "sunsets").

And a funny thing -- you probably know by now that I am obsessed with body language. Well, one of the teachers told me afterwards that one male student seemed not to be concentrating all that much during my presentation. The teacher figured this out because she saw him COMBING HIS LEG HAIR!! Though I didn't like to learn that he was not paying complete attention, I do give the young man POINTS FOR CREATIVITY! Have a great rest of the day wherever you are. Best not to comb your leg hair in public!!!