May 13 Posted by Monique Polak in Uncategorized 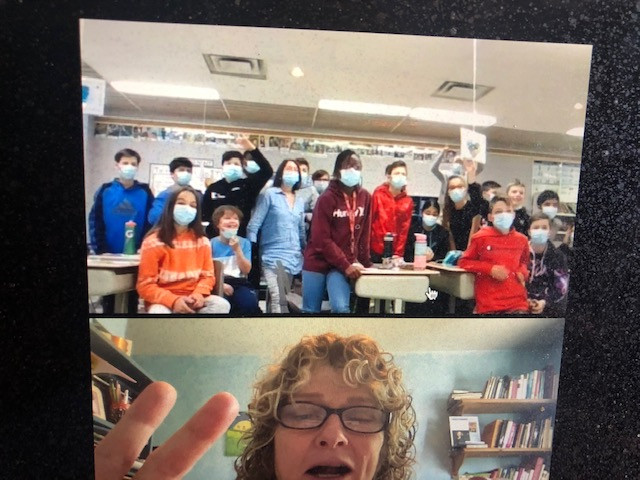 Wow! I sure am getting around during this pandemic!! Last week I was in Newfoundland, Saskatechewan and BC!! Today, I was in Repentigny, which is about a 40-minute drive from Montreal. But thanks to the wonders of Zoom, I was there in seconds!

I worked with Ms. Manon's Grade Six ESL (English as a Second Language) class. Most of my writing workshops last an hour, but I had two hours with these students. I expected they might get restless, especially since their first language is French, and I was presenting in English -- but they were super focused and well-behaved. Thanks, Ms. Manon for the work you've been doing with them this year. I had to laugh when, towards the end of my presentation, I was about to give a writing exercise and a student named Samuel wanted to ask another question -- that's when Ms. Manon told Samuel, "I'm the boss -- not you!!"

Not only did Ms. Manon's comment crack me up, I also grabbed my pencil and wrote it down so I could remember it -- for this blog, and also for a possible future story. Ms. Manon's comment prompted me to share another writing tip with the students -- writers need to LISTEN IN FOR INTERESTING MATERIAL. Ms. Manon's line -- which can be considered DIALOGUE -- helps us learn about her character. We can see that she is funny, but also firm with her students. (I happen to like these qualities in a teacher, and I think I may possess the same qualities. At least I hope I do!!)

The class has been studying the Holocaust. They are working on their own stories about Anne Frank, and so they were impressed to learn that my mum, who died four years ago, KNEW ANNE FRANK. They were the same age, and both in grade seven, at a school called the Joodse Lyceum in Amsterdam. (They weren't in the same class, but my mother remembered seeing Anne Frank often.)

We talked about my book What World Is Left, which is a work of historical fiction based on my mum's childhood experience in a Nazi concentration camp called Theresienstadt. We also talked about SECRETS. I think that if I hadn't pushed my mom into telling me her story, she would have taken her secret to the grave. And I also think that, in the end, she was glad to have shared her story with me -- and ultimately, with lots of kids around the world.

Charles-Olivier wanted to know, "When did you think you wanted to be a writer?" I told him I knew when I was a little kid, but that it was my fifth grade teacher, Mrs. Browman, who gave me the enouragement I needed. She treated me like I was a writer! I showed the students my recent historical novel, Room for One More -- because it's dedicated to Mrs. Browman!

This morning's visit made me happy. And guess what? I have the afternoon off -- no marking, no school visits... WHICH MEANS... TIME TO WRITE! Hope you get some writing (and reading) time today too. Thanks to Ms. Manon for the invite, and thanks to the kids at Ecole Primaire Jean-Duceppe for being such a keen audience!