Another Happy Day at Centennial Academy 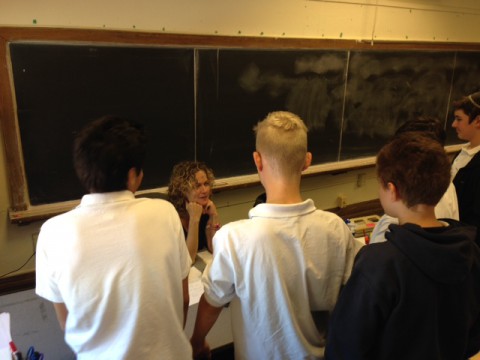 You know how you can tell for sure that I'm enjoying the kids I'm working with at Centennial Academy? This coming Monday, I'm going to go and eat lunch with them -- just so I can hear more of their stories and answer questions they may have come up with after meeting me.

Today, I worked with two of Miss Markies's English classes. Also, my day started off happily (no broken fridge, no bicycle with jammed brakes!)... Miss Markies must have noticed last week that I have an aversion to holding chalk, so she gave me the perfect gift: an electric blue chalk holder!! (I will treasure it always, Miss M!)

I started the morning with Miss Markies's Grade Nine class. They cracked me up when I asked how many of them (there were 15 students in all) TELL LIES and 12 of them put up their hands! I explained that fiction writers need to tell good lies! I told the students that I've been working on a book about a princess who tells lies. I asked them, "What do you think my editor warned me NOT to do?" A student named Oscar came up with the answer: "Don't make her typical," he said. Which is exactly right. A student named Michael suggested I combine characters from two of my books. A student named Avi pointed out something I never realized: there is a boy named Todd in my book Pyro and also in Home Invader. (I guess I like the name.) "What if they turned out to be the same person?" Avi suggested. And a student named Dario told me something wonderful his mom told him about people who have learning disabilities like ADHD. Dario's mom said, "We're not defective; we're different." (I love that philosophy!)

Later, I did a workshop for MIss Markies's Grade Ten students. A student named Benjie wanted to know whether there is a connection between the writing I do in my daily journal and the writing I do for my books. I explained that the journal is my warm-up activity, but that sometimes, when I'm in what I call a writing pickle, I use my journal to try and figure out a solution. A student named Alexia told me she also keeps a journal. "I've already filled five books," Alexia said. "I write about my day and how it was -- and if there were any problems." Alexia, you sound like a writer to me!

Many thanks to my friends at Centennial for another happy day of writing workshops. Hey, don't forget that I'll be around for junior and senior lunch on Monday. Come by to say hello!