Back at William Latter School! 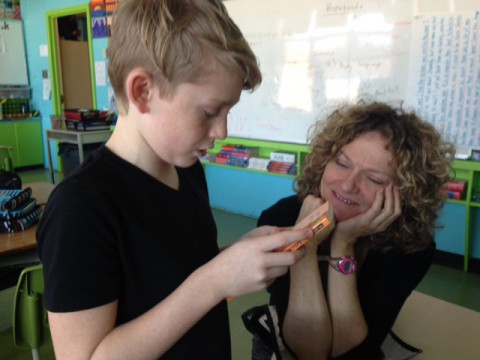 I was back today at William Latter School in Chambly, working with two more Grades Five and Six classes. In today's pic, I am with a lovely young man named Kyler, who, I think it's safe to say, is my biggest fan in Chambly. Until his teacher, Miss Kozub, suggested he read my Orca Currents title, Junkyard Dog, Kyler says he wasn't much of a reader. Now Kyler's read three of my books -- and I left him another one to get busy with (he promised to pass it on to school library when he's done). I asked Kyler to tell me why he likes Orca's Currents series, and he told me: "The biggest reason why I actually like them is because someone my age can really relate." YAY!!

So, today I worked with Miss Kozub's and Miss Kim's groups. I must say the mood in the two classrooms was very different -- Miss Kozub's students were hardworking and serious; Miss Kim's had a zillion questions for me -- and also a lot of stories that they wanted to share!

I thought I'd use today's blog entry to share some of the highlights of my day at William Latter. In Miss Kozub's class, I OBSERVED (writers need to do a lot of observation) a student named Samantha. What I noticed about her was how her blonde hair, which was tied back in a ponytail, shone in the morning sunshine, and looked like a HALO. When I asked Samantha whether she was angelic, Samantha fluttered her hand in the air -- as if to say, "so so!" I'm thinking it would be fun to open a novel with an angelic-looking girl who is not 100 per cent angelic!!

I told both classes how writers need to ask WHAT IF? in order to move their stories forward. One of Miss Kozub's students, Elyse, came up with an amazing WHAT IF? We were talking about how the Nazis hated Jews, Roma, those who were disabled, as well as those who were gay, and Elyse wondered out loud, "What if one of the Nazis was gay?" Amazing story idea, Elyse!

I also talked about how writers need to be SNOOPY. So when I came back from recess and found one of Miss Kozub's students, Carl-Eric, reading my notes, I admired him for his SNOOPINESS. Good work, Carl-Eric!

Miss Kim's students had some great ideas for themes they might explore in stories. Christopher suggested writing about jealousy; Jayden came up with the theme of being left out. Miss Lyne, a French teacher who was with Miss Kim's kids for one period, had a good question for me. She wanted to know, "DId any of your books ever get rejected?" I told her the answer was YES and I thanked her for asking me the question. Four or five of my manuscripts were rejected before I made my first book sale. I explained to the class that the only reason I got to be a published author is that I NEVER GAVE UP. I told the kids that whatever they dream of doing, they should go for it, and they should expect obstacles along the way -- but that they mustn't give up. Ever!

So, many thanks to my friends at William Latter for having me back at your school. I feel inspired by the time I spent with you guys. Thanks to the teachers for sharing your classes with me; and thanks to the students for being wonderful!!!