Back from the Burlington Book Fair 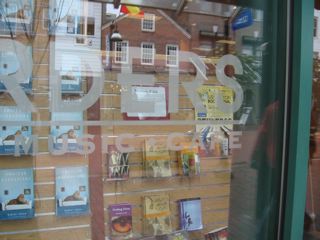 Today's pic is of the window at Border's bookstore in Burlington, Vermont. And you see someof those books? They're mine! It's very exciting to see your books in a bookstore window.

I was one of several Montreal children's authors who appeared at this year's Burlington Book Fair in Burlington, Vermont. Children's book mover and groover, Carol-Ann Hoyte, helped to get us invited -- and I drove down to Burlington with her and another friend, artist Stella Papadopoulos.

My afternoon event was not too well-attended (let's just say Mick Jagger would not have been impressed!), but I did get to meet some interesting people during the day. Carol-Ann, Stella and I went to hear Vermont picture book author Elizabeth Bluemle read from her newest book, How Do You Wokka-Wokka? Elizabeth, co-owner of the Flying Pig book store in Shelburne, Vermont, told us she got the idea for her book from her two-year-old nephew who used to ask, "How do you wokka-wokka?"

"I loved that question," Elizabeth said, "the mystery of it. It collided with my memories of growing up on the Upper West Side in New York and of block parties." Elizabeth said that when she gets stuck in her writing, she takes her dogs out for a walk. And like me, she gets some of her best ideas in the shower! In fact, she has gone one step further than me: she has a scuba board in her shower, so she can actually WRITE STUFF DOWN!! Now I want a scuba board, too!!

Someone in the audience asked Elizabeth whether she has plans to write for adults. Elizabeth said she hasn't ruled out that possibility, "but I identify with kids so much. That's where my heart is."

At Elizabeth's talk, I also met Vermont picture book author Leda Schubert , a longtime children's librarian who has become a successful author. I asked Leda whether she had some advice for aspiring writers and here's what she had to say: "Writing is like anything else. You practise. The more you write, the better you get. And the more you read, the better you write!"

But those weren't all the authors I met in Burlington! I also met Cindy Faughnan , who writes middle-grade novels, and her friend Barbara Crispin, an aspiring children's writer. And on my way back to Border's, a woman stopped me and said, "You must be a writer!" (I still don't know how she figured it out -- could be the big hair!!) Anyway, the woman turned out to be Vermont poetess (don't you love that word?) April Ossmann and the two of us ended up going for a coffee together. I learned that April is the former executive director of Alice James Books, but that now she is writing poetry and coaching other poets full-time. I read one of her poems called "One." The opening lines appealed to me a lot. Here they are: "I wanted the avocados--/ I didn't want the avocados". Like Leda, April believes writers need to read a lot. She also thinks our schools should teach more contemporary poetry. (I thought that was interesting because as a teacher I have always focused on classic poetry.) Here's April's advice for aspiring poets: "Read poetry books until they come out of your ears. Read the contemporary poets, too."

As for the avocados, well you'll have to decide for yourself what to do! Have a great day wherever you are. To my new friends in Vermont, it was great to meet you and I hope our paths cross again!

Talking To Myself (Do You Talk to Yourself, Too?)
Back to the Drawing Board!

Great to meet you in Burlington--and I can't wait to read your books!
Leda Schubert

0 Cancel Reply
Great to meet you in Burlington--and I can't wait to read your books! Leda Schubert
Cancel Update Comment

Heroes copies in the tank is no longer the only wow gold candidate, but a copy of the RAI Druid tanks are still the best candidate. Anti-war advantage is very comprehensive and the ability to find a monster that no one individual than, sarcasm, ridicule group can be timely to deal with cheap wow gold emergency situations

0 Cancel Reply
Heroes copies in the tank is no longer the only [url=http://www.goldsoon.com]wow gold[/url] candidate, but a copy of the RAI Druid tanks are still the best candidate. Anti-war advantage is very comprehensive and the ability to find a monster that no one individual than, sarcasm, ridicule group can be timely to deal with [url=http://www.goldsender.com]cheap wow gold[/url] emergency situations
Cancel Update Comment
First Page Previous Page 1 Next Page Last Page