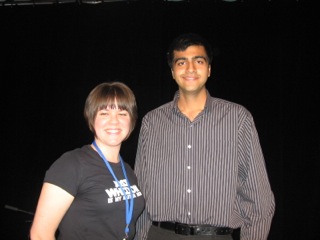 Today's pic was taken on Saturday afternoon at the prize ceremony for a Blue Metropolis contest called "Biting Stories." In the pic, author Alyxandra Harvey has just awarded the prize for top story to Nabil Shah, a Grade 11 student at John Rennie High School here in Montreal.

I had the great pleasure of interviewing Harvey on stage before she announced the contest results. She is the author of the hugely popular Drake Chronicles, a vampire series published by Bloomsbury.

Last week, I geared up for our meeting by reading her latest Canadian release, Bleeding Hearts. I found it so compelling and scary that every time I brushed my teeth, I looked in the mirror  -- expecting to see fangs!!

Harvey told us she has been writing since she was nine years old. She explained how vampire stories have a long illustrious history. She says that overall, the recent success of Stephanie Meyer's Twilight series has been good for other authors working in the vampire genre: "A lot of us wouldn't have been published if it weren't for her."

Harvey says what distinguishes her vampires from Meyer's is that hers have what she calls "snark": "I like the snark... when vampires are sarcastic." During our live on-stage interview, I decided that Harvey did not seem very snarky herself, but she admitted to us that she was on her best behavior! "I do have some snark in me," she said.

What advice does Harvey have to offer aspiring writers? "Be stubborn, stubborn, stubborn. I started sending stuff out to publishers when I was 15. The more rejection letters you get, the better. It means you're writing!"

Writer Rina Singh and a Busload of Students Come t...
"Talent is probably more common than we think" -- ...