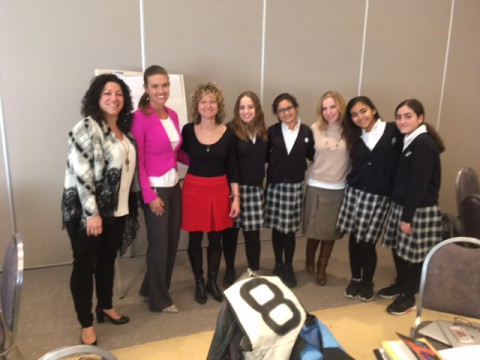 I'm still flying from my second morning at this year's Blue Metropolis Literary Festival. Today, I was at the Jewish Public Library working with Miss Horvath's Grade Seven students (there were some Grade Six-ers too) at Hebrew Academy. If I may say so myself, I got a lot done in my one-hour presentation -- and there was even time for writing -- and lively discussion!

I started with my usual writing tips, and then I turned the subject to stories about bullying and my new book, Bullies Rule. I explained how most stories about bullying focus on the victim, and how I think it'd be interesting to read more stories from the bully's point of view and also from the bystander's point of view. During the short writing exercise I did with the students, I was impressed with a student named Miriam's opening line: "I was a bully a few years ago because I was scared to be bullied." The first thing I did (well, okay, the first thing I did was tell Miriam I liked her work), but then the next thing I did was suggest she leave out the words "a few years ago." So we tried the line out this way: "I was a bully because I was scared to be bullied." Don't you agree that it reads even more powerfully this way? (I follow the rule that the fewest possible words are usually best.)

Because I am always HUNTING for stories and a SNOOPY person by nature, I noticed that a student named Yehuda was wearing a rather unattractive cast -- the thing that made it unattractive was that it was on his left forearm and also two of his fingers. Well, it was a good thing I asked Yehuda about the cast because he ended up telling me a story that gave me goosebumps (goosebumps happen when I hear a story I might end up writing about!!). It turned out Yehuda was playing basketball with Baruch (a boy sitting two seats over from Yehuda this morning) and Baruch accidentally broke Yehuda's finger. "Did you cry?" I asked Yehuda. I got the goosebumps when he answered, "Yes." I also asked Baruch how he felt about what had happened and whether he had tried to make it up to Yehuda. "I called him afterwards. My dad thought I should buy him something." I smell a story there. Do you?

At the end of my session, I told the students about the monkey man charm I wear around my neck -- and I told them how the story formed the basis for what will be my first picture book. A student named Gavi had a great question, "Is that how you wrote it?" -- Imust say that question impressed me a lot. So I explained that no, I had to inject a lot of imagination into the real story to turn it into something that would appeal to kids today. And that I also relied on my memory of a shocking thing that happened during a giant storm when I was a kid. Memory, I told the students, is a big part of a writer's toolbox.

You can probably tell that I had a great time with the kids at the Jewish Public Library today. In fact, I was having so much fun that I forgot to get someone to snap a pic. Luckily, a few students came back to chat with me while I was packing my book bag! In today's pic, you can see those girls, as well as their teacher, Miss Horvath, who is standing between them. The JPL's children's librarian Talya Pardo is at the far left. And next to her is my surprise visitor -- the library's director of  financial resource development, my former student Alyson Lozoff!

I'll be back at the festival every day this week. Stay tuned for more updates!

My name is Gavi not Gavin

Thanks, Gavi. Just made the fix. See -- all writers need editors!

Hi Monique,
Our students really enjoyed their time with you today. I wanted to mention that six of the students, including Ben who you quoted, were Grade Six students from Akiva School. Thank you for inspiring a new generation of writers!

0 Cancel Reply
Hi Monique, Our students really enjoyed their time with you today. I wanted to mention that six of the students, including Ben who you quoted, were Grade Six students from Akiva School. Thank you for inspiring a new generation of writers!
Cancel Update Comment
First Page Previous Page 1 Next Page Last Page