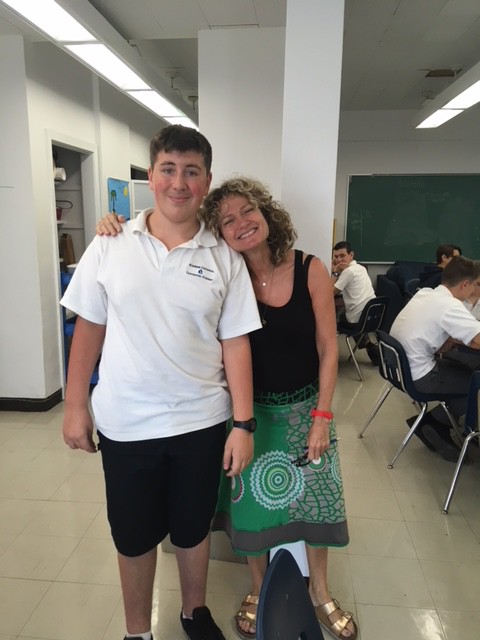 I'm just home from my first school visit of the new school year. And did I ever have a wonderful time!! (I hope the students did too.) I was at Centennial Academy, working with three groups of students from Grades Seven and Eight, and I even did one presentation in French. I have to say the students at Centennial are delightful -- energetic, bright and funny. In today's pic, you'll meet Massimo, who stood up when I came in, and announced, "My name is Massimo and I read your book Finding Elmo in one day, the day before school started!" (So now you understand why Massimo gets to be in the pic!!)

Another funny moment: before a writing exercise, I asked the students to close their eyes so they could return to a memory from their pasts. When it was time to start writing, a student named Alamo asked me, "Do we write with our eyes closed?" OOPS! I had forgotten to tell the students to open their eyes. Nice catch, Alamo!

When I was working with Miss Bryon's Grades Sevens, I had the students make a list of words that start with the letter M. Dario came up with MALICIOUS. And Nathan came up with MORSE CODE. I have to say I was pretty wow-ed by those M words. Nice work, guys!

I talked about the things that matter most to me as a writer: doing research, paying attention to details, and REWRITING. A student named Kai from the French group asked, "Comment je peux écrire si je suis dyslexique?" I told Kai there are many great writers who are believed to be dsylexic, including one of my favourites -- James Joyce. I also suggested to Kai that he write a story about a young writer coping with dyslexia. Joyce was unusually playful with words, and some critics connect that to his dyslexia. So, as I told the students, often a perceived handicap brings its own special, surprising gifts.

In my last group, I met a student named Ava who told me, "I've been writing stories and getting stuck a lot." Luckily, I had some tips to help Ava get un-stuck. The first one is just accepting that getting stuck is part of being a writer. I told Ava that if I met a student who told me writing always comes easily and everything she writes is fabulous, I would know right away that person was NOT a writer. WRITERS GET STUCK! It's an occupational hazard! I also compared writing to running. When I run and I get a stitch in my side, there is only one thing to do: KEEP RUNNING. The same goes for writing. Ava, keep writing, and you'll get unstuck!!

I'll be back at Centennial next Friday to work with the senior students. Something tells me I'll have plenty to blog about! Thanks thanks to my friends at Centennial, especially Miss Byron, for inviting me to work with your students. Here's to stories and having fun and working hard -- and making writers happy!!

Tweet
Another Amazing Day at Centennial Academy
Something to Blog About!

More posts from author
Thursday, 25 June 2020 In Which I Teach a Virtual Class on Pic Bk Writing
Friday, 15 May 2020 Lemme Tell You About Tim Wynne-Jones's Book Launch Today!
Monday, 13 April 2020 Writing -- and Teaching -- During a Pandemic

Hey this is Massimo, I'm very happy to say that i'm the first one to comment on your blog and I thank you for making me become famous.

0 Cancel Reply
Hey this is Massimo, I'm very happy to say that i'm the first one to comment on your blog and I thank you for making me become famous.
Cancel Update Comment

Hey!!!!! Its Rafael from centennial nice blog its pretty awesome hopefully next time we can get a picture together i would love to show it to my mom who is a huge fan looking forward too seeing you on friday and yes i will be finding you at lunch

0 Cancel Reply
Hey!!!!! Its Rafael from centennial nice blog its pretty awesome hopefully next time we can get a picture together i would love to show it to my mom who is a huge fan looking forward too seeing you on friday and yes i will be finding you at lunch
Cancel Update Comment