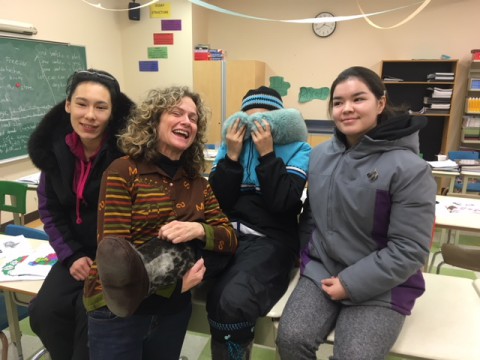 This week, artist Thomas Kneubuhler and I are in Quagtag, another village on the Ungava coast. We are here for a Blue Metropolis Literary Foundation project called Quebec Roots. Our assignment this week is to help students at Isummasaqvik School contribute a chapter to a book that will be published in 2018. We'll help them tell a story about their community using words and photographs.

We're working with Cameran's and Arul's classes. Our first task was to get the students to choose a topic for their chapter. So far our tentative title is "Girls and Boys in Quagtaq -- Then and Now." (I LOVE THE TOPIC.) The kids want to write about traditional Inuit gender roles -- how men have traditionally done the hunting, and women the sewing -- and how that has begun to change.

This morning, I helped the students write a poem about hunting and sewing. When we got to the sewing part, two boys, Thomas and Putulik, explained that they sew too. As Thomas told me, "We fix destruction." As you can imagine, that line made it into our poem!

This afternoon, we worked on a poem with the super-fantastic title "My Kamiks Are In the Freezer." Kamiks, in case you didn't know it, are Inuit boots. The main writer of the poem was a student named Natasha, who came up with the line that gave the poem its title. I had a lot of fun hearing about all the steps that go into making kamiks. Natasha would maybe have left out some of the steps, but her classmate Saijuula wouldn't let her! As Saijuula told me afterwards, "It's important to put in the details." Spoken like a true writer, Saijuula! What made working on the poem extra-fun is that Natasha has a great sense of humour. This is how she ended her poem: "This is the first and last time I make kamiks. It's too much work!"

It also helped that a student named Dallacy was wearing a pair of kamiks that her mum had made for her. In today's pic, you can see me laughing with the girls -- and holding up one of Dallacy's kamiks for you to see.

Tomorrow they're predicting a giant blizzard here in Quaqtaq. I don't know about the kids, but I'll be brokenhearted if school gets cancelled. I am so looking forward to getting more poems and stories out of these students -- and to seeing their photographs.

Three cheers for the kids we've been working with, three more for their teachers and for Amber Doughwright, the ped counselor from Kativik School Board who organized this trip... and three cheers for us. On my run this morning, I thought to myself, "Monique, right this moment, you are the luckiest woman in all of Quebec!"