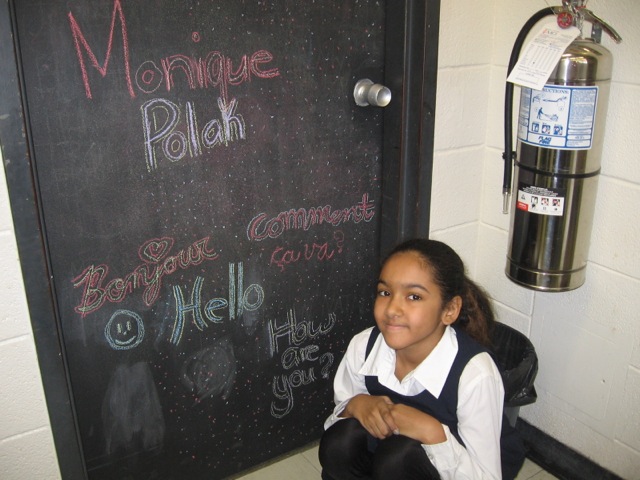 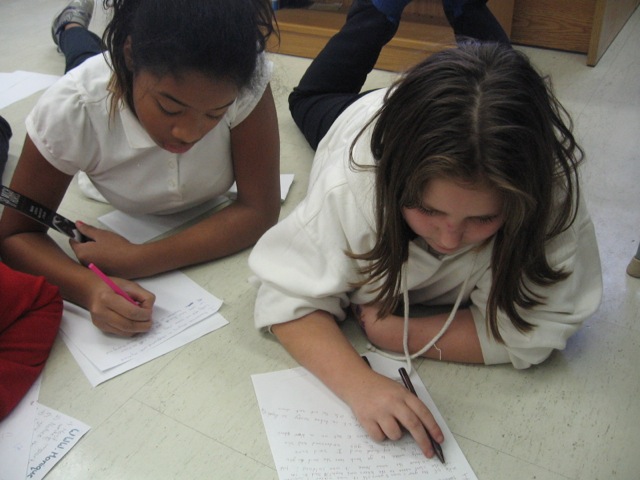 I'm just in from a happy day at Orchard Elementary School in Lasalle. I worked with two groups of Grades Five and Six students -- and they were lively!

In today's first pic, meet Madison who, along with her friend Amanda, decorated the library door for my visit. I had to take a picture of course! And in the second pic, you can see two students engaged in my favourite activity: WRITING!

You may notice that in the second pic, the student on the right, Kayla, has a small booboo on her nose. Well, believe it or not, that ties into some of the writing tips I shared with the students today. First of all, a writer needs to be observant. Second of all, a writer needs to be snoopy. So, first I observed the booboo, then I inquired about it. Kayla told me she sometimes has trouble breathing, so she uses a nose strip -- only she put it on too tight and it left a blue mark.

This turns out not to be the end of the story. When I was leaving the school with Miss Wendy, the librarian, we spotted Kayla -- with gauze on her forehead!! So, once again, this snoopy writer asked what had happened. Well, during recess Kayla whacked her head on some ice. You know what? I just might need to include a girl like Kayla in one of my stories -- a girl who is having an accident-prone day. (Kayla, I hope you get a good sleep tonight and wake up booboo-free tomorrow!)

I told the students as much as I could about how writing works -- how it's important to make writing and reading daily habits, and how both those things have saved my life! I also explained that writing doesn't only happen at a desk, and that sometimes I write when I am in the shower or making tea. A student named Jaden remarked, "Writing doesn't always come from a pen" -- I thought that was a beautiful, creative line.

We also talked about interviewing people in order to learn their secrets. I suggested that students interview their grandparents and if their grandparents are not available, to round up someone else's grandparents! A student named Jahni said that when his grandpa was recently visiting Montreal, he stopped strangers to tell them stories. Now that grandpa sounds like a perfect person to interview!

We also talked about how trouble fuels stories. A student named Lytia asked me, "So you don't use good?" I thought that was a brilliant question, Lytia. It is true that, generally, I use a lot of trouble in my stories, but usually, the characters develop because of the troubles they experience ... and I think that's definitely a good thing.

So, I must admit my house feels kind of quiet after being at Orchard Elementary. Thanks to Miss Wendy for inviting me. And to the students, thanks for the inspiration. Don't forget to read and write -- and stay out of trouble. But if trouble happens, use it in a story!!

Falling in Love with a Class
Some Days Being an Author Means You Get to Go to F...