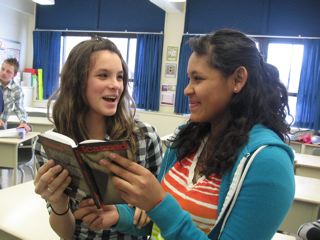 I spent today at Rosemere High School, where I worked with two lively Secondary I classes. My visit was sponsored by a program called Culture in the Schools and organized by Rosemere High English teacher Freda Lewkowicz. I was excited to meet the students and also Freda, who, because she writes for newspapers including The Gazette -- usually on the Op-Ed page -- I felt as if I already knew!

So, let me tell you a little about today's pics: The first two were taken during my morning session. In the top pic, you'll see two students named Lee-ann and Anjolina pretending to read my book Scarred! (I told the students I was getting a little tired of group photos for the blog, and so the girls suggested this pic instead.) In the second pic, you'll see the students with their teacher Miss Fazio. Because Miss Fazio is so young-looking, I'd better point her out: she's in the middle, wearing a grey sweater.

You are probably wondering about the last picture: an arm with a lot of writing on it. This literary limb belongs to a student named Stephanie, who was in my afternoon group. As I told the students, I am always snooping for stories and characters and details -- I thought Stephanie's arm was very cool -- a kind of work of art. Some other things I snooped out today: a student named Alyssa who loves the colour purple (she was wearing a purple hoodie, using a purple eraser and her watch was ... you guessed it... purple!); a student named Dominique, who told us her mom runs a daycare (we discussed how a daycare could make an interesting setting for a story, especially a story told by a teenage narrator whose mom just happens to run a daycare ("What do you have access to?" See Sunday's blog entry if you don't know what I'm talking about!).

The afternoon class I worked with is taught by Mrs. Weir. But I found out something really interesting about this group -- they've had several teachers since school started. Hmm, that gets me thinking... wouldn't you like to read about that class?

I'll end today's blog entry with a funny moment. I always bring one of each of my books with me when I do a writing workshop. A guy named Kevin looked at the books (there are 11 of them so far), and asked, "These are the ONLY books you wrote?" To which I said, "Hey, Kevin, there's 11 of 'em. Isn't that good enough?!!" The answer is apparently not. Well,  there's good news, Kevin: I've got another book coming out this spring!

I'll be back at Rosemere on Feb. 1 since I'm doing a series of workshops with students there. I'm already looking forward to my return visit. Have a good weekend wherever you are... and good luck snooping for stories!! 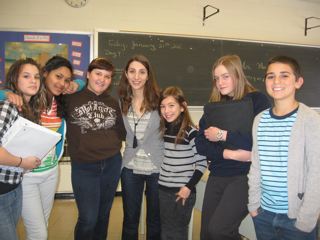 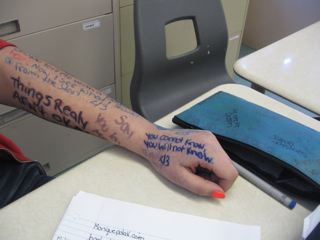 Meet One More Class!
Meet Two of My Classes