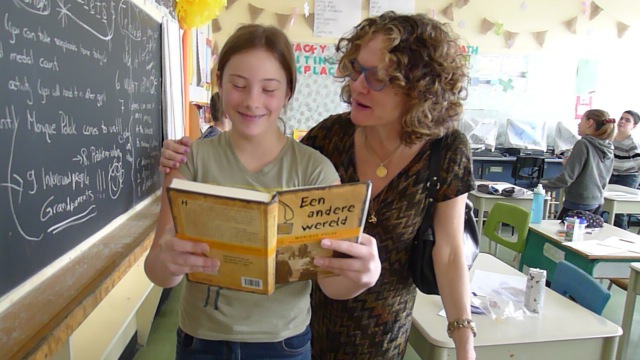 In case you're wondering why, in today's pic, I am reading (with a little help) from the Dutch version of What World Is Left -- it's because I did a visit at William Latter School in Chambly, and I met a student named Amber, who moved from Nijmegen in the Netherlands, to Quebec when she was eight. I happened to have Een Andere Wereld in my book bag and it was great fun to hear Amber read from it!

I worked with three groups of Grades 5 and 6 students and they were all a pleasure! William Latter is a happy school. I know because I was SPYING (one of the things I tell students in my writing workshops is that writers need to be spies). Because I arrived early, I sat in the hallway reading (another important thing we readers have to do!), but also spying. I got to see several moms and dads drop their youngsters off and I enjoyed hearing some sweet I-love-you's!

Because each session was 75 minutes, there was time for students to do some writing. Oliver wrote about how he felt after his grandparents died. Here's one of Oliver's lines that I really loved: "Every night I had a bad dream that my whole family died." As I told Oliver, this is a powerful line that lets the reader understand his feelings. Makaylah described a camping holiday and how there was a snack bar where the owners "gave free Popsicles to all the kids at night." Who could read that and not feel Makaylah's excitement?

I got to know students in my second group best because several stayed around to have lunch with me. You may know that I collect interesting names. Well, I met a lovely girl with the beautiful name Océane and guess what she told me? She hasn't been to the ocean -- but she wants to go! Stephen, who has a great sense of humour, asked me, "Do you hide things in your hair?" You know what, Stephen? You're giving me an idea for a story!

In my last group, a student named Stephanie wrote about standing in the forest "with my hand held open with birdseed in it." That line feels to me like it belongs in a poem, Stephanie! Fred described being lost in a hotel -- and I told him that has the makings of a story and maybe even a movie!

So, thanks to everyone at William Latter. I was honoured to be part of this year's Reading Week at your school. Thanks to Principal Mrs. Lessard, and to teachers Miss Kelsey, Miss Kozub, Miss Kim and Miss Cindy for sharing your lovely students with me today!

Tingles Inside Our Elbows -- A visit with the 85th...
Introducing Sylvia Gunnery... and Squiggly Lines