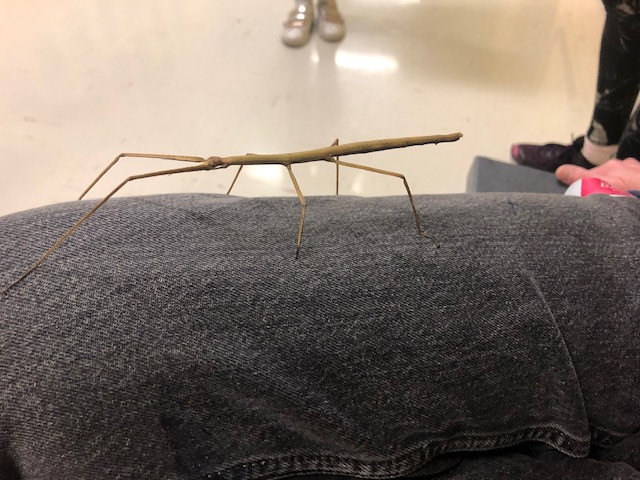 I know what you are thinking — what is that thing in today’s pic? And what in the world does it have to do with yesterday’s writing workshops at Ecole Secondaire de la Seigneurie in Beauport, Quebec?

Well, one of the things that I told Mr. Lord and Ms. Alexandra’s Sec. III students with whom I worked, is that writers need to be observant. So when Mr. Lord and I got back from our excellent lunch at the local Mexican resto (subject for a food blog), and I spotted this creature on another teacher’s knee, I stopped to observe him (the creature, not the teacher!) And I even got to pet the creature! In French, he’s called a “phasme.” In English, he’s a stick bug. I have visited hundreds of schools, but this was my first encounter with a phasme!

I did my usual writing workshops, but I focused on my Holocaust stories. That’s because Mr. Lord’s students are reading What World Is Left. Some of the kids had amazing questions for me. Isaac asked me, “How do you find the time?” That led me to talk about values and
goals. I told the students that if they value something they need to make time for it (like I do with my writing).

When I showed the students my “morning pages” (the three pages of free writing I do every morning), a student named Derek called out, “All in one morning?” — which cracked me up!

A student named Léanne told me something beautiful: “I keep a journal. I go there when I have hard times to remember what I
did to get out of it.”

Ms. Alexandra’s students were super fun and focused. I have to admit I was captivated by Nathan, a young man with purple hair and a big personality. It turns out Nathan is full of stories and he enjoys doing research about what he calls his “obsessions.” All this will serve you well in your writing, Nathan!

Nathan’s classmate Zara has invented a fictional character named Nevi — whom she likes to draw. Another student Elodia (let me know in a comment if I spelled that wrong, kids) asked me: “Is it a good idea to base stories on dreams?” To which I answered YES
YES and also YES!!

I finished the day with another one of Mr. Lord’s classes. By then, I think, we were all a little tired, but we still managed to have a lively discussion and to do one writing exercise. A student named Réol stole my heart with the little piece he wrote, which he has permitted me to share with you: “None of it matters as you dribble the ball in the paint. It’s just you… one soul… in space.” I told Réol he’s not only a basketball player, he’s also a poet!

I had planned a second writing exercise for the last group, but when I suggested we skip it, a student named Alexandre called out, “Yup!” — which made all of us laugh, and which was the perfect end to a pretty perfect day.

Thanks to the kids for being smart and fun and funny. Thanks to Mr. Lord for the invitation, and thanks to him and Ms. Alexandra for sharing their students with me. Grand merci à tous de Monique!