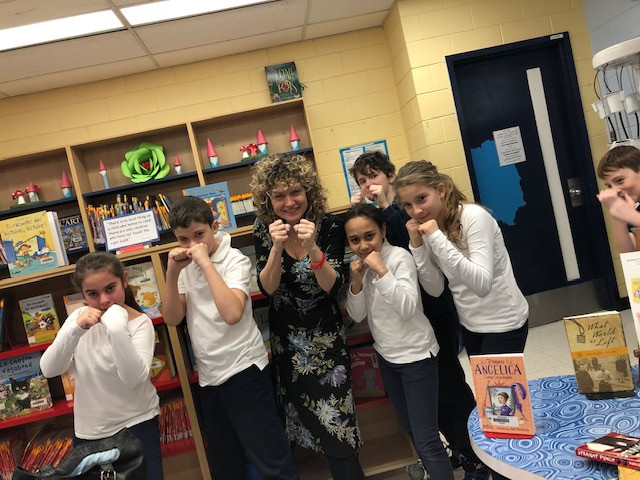 Today's blog entry comes to you from Michelangelo International Elementary School in Rivière-des-Prairies! So I bet you're wondering about today's pic! What exactly am I doing with those three kids? Well... I was explaining that writers need to do RESEARCH, so I told them how, for my YA novel, Straight Punch, I took boxing lessons for three years! I was showing them my moves when a few of the kids started to demonstrate in their seats. Note, for instance, Amanda, who's to the right of the me in the photo -- she takes kickboxing. Anyway, we decided to pose together for this pic.

I worked first with Ms. Elisa's Grade Six class, then with Miss Ida's Grade Fives. Both groups were great audiences. The librarian at MIES is also the librarian at East Hill, where I was on Monday and Wednesday this week, and she's another Miss Ida. So in honour of Miss Ida the librarian, I started the day by asking the Grade Sixes to each make a list of words that start with the letter I. Diego's list included the word icon, which I thought was a very cool word for someone his age. Giada's favourite word on her list was ice cream, which she added, is also her favourite dessert. I told the students they could even include words from other languages, so Diego's list included the word Inglaterra, which is Spanish for England. The point of the exercise was to remind us that words can be fun.

A funny moment happened when I was discussing something serious: the concept of what is known as "enthusiastic consent." I explained that if a young person, or a person of any age for that matter, wishes to have physical contact with another person, they must ask for "enthusiastic consent." (This came up because I was telling the students about a book I've been reading where a male character does not ask for consent before he kisses a girl he hardly knows -- and that part of the book upset me.) Anyway, Diego asked, "Does that apply if you want to beat someone up?" Which led me to tell the students that I think WHAT IF? is one of the most important questions to ask if you are a writer. WHAT IF a Grade Six student, perhaps named Diego, asked another kid if he was enthusiastic about getting beaten up? Might that lead to an honest conversation about whatever is bugging Diego and the other kid? Hey, you know what? That could be a book!

When I was working with Miss Ida's (the other Miss Ida!!) Grade Fives, I was talking about reading again (writers need to read A LOT). I said, "When I read..." and then a boy named Cristian finished my sentence for me. "You get ideas! Cristian added. Exactly, Cristian. (And see, I spelled your name right, Cristian-without-an-h!)

Later this term, the class will be reading Karen Levine's book Hannah's Suitcase, so it was a good opportunity for me to talk about my own connection to the Holocaust and how my YA novel, What World Is Left, is based on my mum's childhood experiences in Theresienstadt, the same Nazi concentration camp where Levine sets her story.

Many students had family stories that were related to the Second World War. Paolo's grandfather escaped the Nazis in Italy because he had blond hair and blue eyes. Miss Ida (the teacher, not the librarian) told us how, after her father's death a few years ago, she found that he had written his memoirs, in which he told the story of how, as a young boy living in Italy during the Second World War, he fled to the mountains to escape the Nazis, and how they fired at him.

Some days -- and today was one of those days -- it feels to me like STORIES ARE EVERYWHERE. That thought makes me happy happy happy. Now it's our job to "catch" those stories, then write them down, and then share them with our readers.

Thanks to Miss Elisa and the two Miss Idas; thanks to the kids at Michelangelo for being wonderful. I'll be back again at Michelangelo on Monday morning. Until then, let's all go catch some stories!