"I started writing a book, but I'm not that good at it" 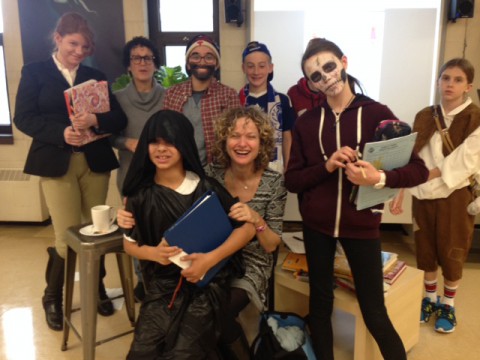 I spent the first half of today doing four writing workshops at Lindsay Place High School in Pointe-Claire. It's Hallowe'en in case you are trying to figure out why there is a ghoul in my lap in today's pic!

The title of this blog entry comes from one of my favourite conversations I had at Lindsay Place today. A student named Krista came to chat with me after my workshop and told me that, "I started writing a book, but I'm not that good at it." I got quite excited when Krista said that because IT'S EXACTLY HOW I FEEL EVERY TIME I WRITE. I also told Krista that there is only one thing she can do -- KEEP WRITING. I even think Krista's dissatisfaction with her writing could be a sign that she's a REAL WRITER. In fact, for me, the challenge is to keep writing, keep working hard, despite the doubts I feel almost every time I sit down to write.
I worked with four of Mrs. Russell's classes -- two grade sevens, and two grade eight groups. I had met the grade eights last year, so we discussed some rather complex material, such as that hearing someone's story can be both a privilege and a burden.

A student named Owen noticed that I was jotting a lot of stuff down. He observed, "You take a lot of notes" and asked, "Do you have a notebook with you at all times?" I told him the answer was YES. I almost always have a notebook with me. That's because we writers never know when a good idea will strike. I also suggested to the students I met today that they do the same thing -- keep a notebook handy to jot down ideas and observations.

Because each workshop was 50 mintues long, there wasn't much time for the students to do their own writing. But I did manage to fit one exercise in with the group of grade eights I worked with before lunch. I asked them to access a memory (I explained that memory is an important part of a writer's toolbox). They wrote some beautiful stuff and I asked two students' permission to quote them here. Yutong Hu, an exchange student who comes from China, wrote about a plane trip to Canada and how she tasted orange juice for the first time. She ended her piece by sharing something her mum told her on that plane ride: "You will be okay." I love that line. A student named Samantha wrote about her love for books. Here's my favourite line from Samantha's piece: "Most of my books are used, so they all have personalities."

Before I sign off for today, I want to tell you one more little story that helps explain why I have a special spot in my heart for Lindsay Place. Last year, I was contemplating writing a story about an untraditional princess. Then, during a visit to Lindsay Place, I met a lovely student named Angelica. Angelica's teacher, Mrs. Russell, told me that everyone calls Angelica "Jelly." Well, that was the inspiration I needed to get that book project started. Angelica, AKA Jelly is coming out in 2018 with Orca Books! And I couldn't have done it without my friends at Lindsay Place. Special thanks to the students for being wonderful, and to Mrs. Russell and librarian Mrs. Dunning for arranging my visit today. Oh, thanks also to Principal Estok, who dropped by to catch part of my workshop -- only I thought he was the chef from the cafeteria. I guess I was so pleased that a chef wanted to learn about writing that I totally forgot it was Hallowe'en. See what I mean when I say STORIES ARE EVERYWHERE!!!

Adventures at Rosemere High School
Reporting in from Greenwood StoryFest 2016