It's a Wrap! Friday of CCBC Book Week

It's Friday of the Canadian Children's Book Centre's Book Week! Like all the other children's writers, illustrators and performers on tour, I've been traveling virtually across the country. In my case, I've been to B.C., Saskatchewan and Newfoundland -- all in the last five days!

My tour ended at the A.C Hunter Public Library in St. John's, Newfoundland. On most days, I teach teenagers at Marianopolis College here in Montreal. But I was working with a MUCH younger crowd at A.C. Hunter! In fact, the youngest participant -- named Abigail -- was only ten months old!

In the picture at the top of today's blog entry, you'll meet two other workshop attendees -- Angelica, who's four, and her big sister, Johanna, who's six. You can bet I was pretty excited to tell these kids the story of my Princess Angelica book series. And even though the Princess Angelica series -- three chapter books -- are geared for slightly older readers, I decided to read from one of the books, and the kids in my audience listened attentively! (Okay, I can't vouch for Abigail because her mom had turned off the video at that point!!)

I used my full hour with the kids. I did offer them a strech in between, but they didn't want it! And you know what? Even though my participants ranged in age from 10 months to nine, I taught them many of the writing lessons I've been sharing all week with older kids. Such as that it's important to write a lot, and that I pesonally keep a daily journal. To which Johanna proudly replied, "I have tons of journals!" 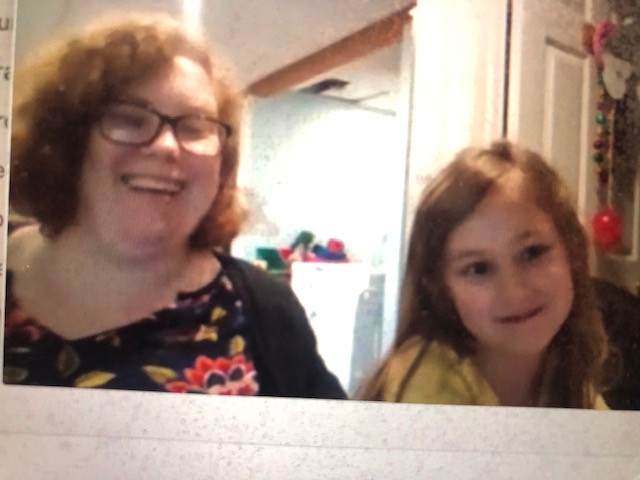 In this second picture, you'll meet my friend, librarian Emily Blackmore, who also helps coordinate Book Week visits in Newfoundland. That's her daughter Izzy in the pic with her. Izzy is six too, and already shows signs of being hooked on reading! I guess that happens when your mom's a librarian!

We also discussed TROUBLE and how it helps to move a story forward. Izzy shared a super smart observation: "There is trouble in fairy books when goblins steal kids' magic items." EXACTLY!

Another attendee was nine year old Steve. Though we never got to see his face (his video was off), I could tell from the chat that he likes stories. So I was delighted when he wrote in the chat  "I learned a lot." And you know what's kind of wild? Steve told us he lives in North Carolina! But somehow, thanks to the magic of the Internet, he found out about my visit to A.C. Hunter and decided to come!

Next year, I have my first ever picture book coming out! So my workshop at A.C. Hunter gave me a fun preview of what's in store when I work with extra-young readers.

Thanks to Emily for organizing yesterday's visit; thanks to the kids and their parents for attending; thanks to the CCBC for a wonderful Book Week, and also to Newfoundland and Labrador Public Libraries for the invite. I really hope that one day, I can visit the A.C. Hunter Public Library in person!

Tweet
Lots of Fun With the Kids at St. Mary's Elementary...
Some Days, Magic Happens: Day 4 of CCBC Book Week