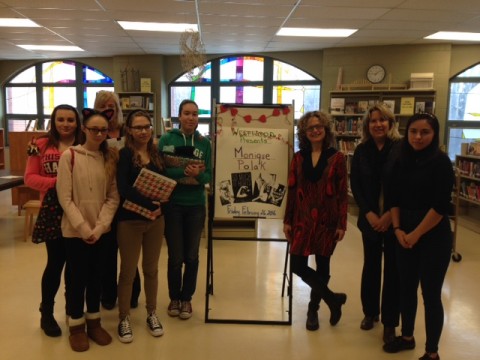 It's the last day before March break -- so you can't blame the students across Quebec for being excited. That helps explain the lively cast of characters I met this morning when I did writing workshops with three Grade Nine classes at Westwood Senior High School in Ste-Lazare.

So, let me tell you about some of the characters. Just before I started my first presentation, a guy named Jonah attempted to clobber a guy named Ryan using a vinyl pillow. It turns out there was a story behind this incident. (There is always a story!!) I thought Ryan was perfectly innocent, but according to Jonah, there was a prior attack for which he was seeking revenge. I also met a student named Elizabeth who was wearing cat ears attached to a headband. Elizabeth explained to us that her mom had made the ears -- most impressive! -- and that they are for a role-playing game that Elziabeth is into. Another interesting character was a young man named Brandon who showed genuine interest in learning about the semi-colon. (Let's just say that after 32 years in the classroom, it is unusual for me to meet a student with any interest whatsoever in punctuation!)

I worked with two teachers -- Miss Sanders and Mr. Grenier. Both teachers are keen on getting their students to write. When I was saying that reading great books inspires me to work harder, Mr. Grenier told us that he plays guitar -- and he remembers feeling similarly inspired after listening to great guitar performances.

I only had a one-hour session with each group, but I managed to cover most of my usual writing tips, and also to get the students writing. We talked about how writing can become a habit, and I mentioned some recent research I heard about that indicates you can form a habit if you keep it up for three weeks straight. I write three pages ever morning, but that is probably too much for most young people. But, as I told the students, even if you write a quarter of a page a day, or a couple of pages every weekend, well, that can turn into a habit too.

Wishing all of you a happy, healthy March break. Hey, there's good news -- we'll have plenty of time for our writing habits.

Special thanks to librarian Lynn Austin for the invite -- and the tea. I'll be back at Westwood Senior on March 19. I'm planning to stick around for lunch, so if any of you have stories you plan to work on, come show them to me!

Happy Day at Lindsay Place High School
Back in the Basement!