Earlier this week, I had the pleasure of interviewing a real star on the Canadian YA book scene: Amy Mathers.

Amy is the heart and brains behind Amy's Marathon of Books, an exciting initiative that aims to raise awareness about Canadian YA fiction, and also to raise funds for a new Canadian Children's Literature teen book award. 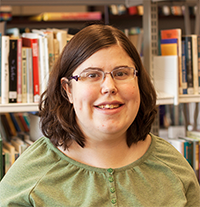 Amy, who is 31, has had two major surgeries: a heart and liver transplant. Though she is doing well, she is confined to a wheelchair and will never be able to run a 26-kilometer marathon. So Amy came up with her own idea for a marathon. On January 1, 2014, she set out to read 365 Canadian YA novels and to write a daily review of each one. She's moving across the country in her reading choices. Soon, she'll get to Quebec and I'm delighted that three of her reading days will be spent on my books!

Because Amy lives in Toronto, I had to settle for a telephone interview. I asked Amy how she got hooked on reading in the first place. She credits her parents -- Deb and Derek Mathers -- for introducing her to books. "My parents were big readers," Amy told me. "YA began to take off when I was in early high school," Amy added. Her favourite writers included Jean Little and Kit Pearson.

On the morning we spoke, Amy was 21 pages into Hemlock by Kathleen Peacock. Here's what she had to say about the book: "It's an adventure story about werewolves. It's very engaging and it has a human side."

Amy likes to read in bed, but she told me she'll read pretty much anywhere -- including on the subway or in a car.

Maybe because as a teacher I'm always encouraging young people to write, I asked Amy when she was going to write HER story... it turns out I'm not the first person who's asked her that question. But then Amy told me something really interesting. She said, "I've read so many amazing books, I'm slightly intimidated at the thought of writing my own. It's a scary thing." Which made me tell Amy a little of my own story -- that after studying English Literature at two universities, I felt the same way. I'd read so much amazing stuff I didn't think I had anything new to say, and I was sure I'd never be able to say it as well as the authors I'd been studying... but then, well... I just had to write. I had to try to tell the stories that mattered to me. I have a feeling that'll happen to Amy too. And what better training for a writer than to read non-stop?

Amy encourages readers to take up her 13 book challenge -- to read a YA book from each province and territory before the end of 2014. Check out Amy's webpage to learn more about the challenge.

Amy's hoping to raise $100,000 for the Canadian Children's Book Centre to fund that new prize. The first thing I did when I got off the phone with Amy was to write a cheque and send it right over to the CCBC. You can also make donations on-line.

Way to go, Amy! Thanks for supporting Canadian YA -- and for being such an inspiration!

Tweet
My Day Gets Off to a Happy Start: Visit to Honoré-...
Tingles Inside Our Elbows -- A visit with the 85th...