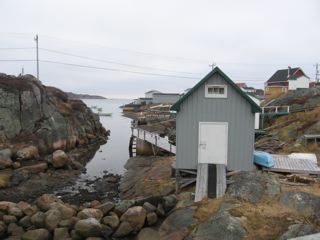 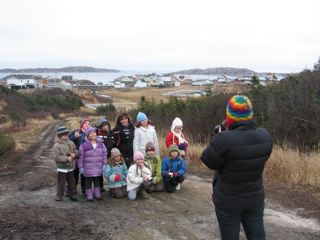 Harrington Harbour is just gorgeous. It's located on a small island and most of the houses are quite close to the St. Lawrence and built of clapboard. Only about 350 people live here and of course, everyone knows each other. There are no roads on the island, and people get around on ATV's (all terrain vehicles). Also, there's a beautiful wood boardwalk that gets you everywhere. The students are going to write about (and photograph) the boardwalk (and all the cool places it leads to) for their chapter.

But the really best part of visiting Harrington Harbour, even better than the helicopter ride from Chevery (!) and my run on the boardwalk yesterday morning, was meeting the kids. We Moniques worked with ten Grades One, Two and Three students. As soon as we arrived at the school, a couple of them came to give us hugs. (I found this very special since my daughter -- a grown girl -- had been visiting last weekend from New York and we said good-bye at the airport just before we both caught our flights, and well, I needed some hugs!)

Another great thing happened when I asked the students if they like to write and they nearly all said YES!! (Mostly when I ask this question to students, they just shrug!!) Credit here goes to their wonderful teacher Miss Kitty-Sue Jones.

Kassandra told me, "Writing is fun." Matthew said, "It's fun to come up with new ideas." Taylor wants to write a story about bunnies. Callie said, "I like making up stories."

Monique D taught the kids a lot about taking pictures. In today's pics, you can see Harrington Harbour, and also Monique D shooting a pic of the kids.

So hopefully we two Moniques have succeeded in touching some minds and hearts in Harrington Harbour. You guys have a lot to write about, and lots of great photo opportunities. We look forward to seeing what you produce over the next couple of months. Many thanks to Blue Met for sending us to Harrington Harbour, to Miss Jones for preparing your students so well for our visit, and to Amy, the best B&B-keeper we've ever met!

Heading to the Far Far North!
Time To Hit the Road

Hi,
Enjoyed meeting and chatting with you so much! Just wished we could have had more time. Bill's Cove looks good Monique2.