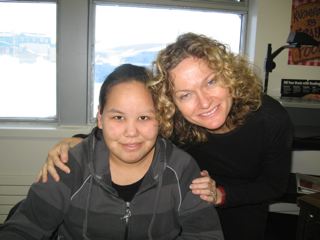 Good morning today from Puvirnituq, a village of 1,600 people on the Hudson Bay side of Nunavik. It took about 90 minutes to fly here yesterday from Kuujjuaq, which is on Ungava Bay.

I spent yesterday afternoon and this morning working with students at Iguarsivik School. One of the fun things about the work I do visiting schools is that every single class is different. This morning, the Secondary IV and V students were attentive, but quiet. On the other hand, the Secondary II`s and III`s were a little wilder and less shy with me. When I told them that writers tend to be snoopy people, a student named Yussi called, out, ``You mean like Charlie Brown`s dog?`` Of course, we all laughed when he said that. When the students did a short writing exercise, Yussi produced a lovely piece, though it was only two or three sentences long. I asked him whether I could share the gist of it with you in this blog entry and Yussi gave me his permission. Yussi wrote about his memory of the day he learned about his grandmother`s death. Because I am so interested in family stories, I urged him to learn more about his grandmother.

Another student who made a great impression on me was Monica. Her teacher, Justin, had asked his students to come up with questions for me. Monica`s questions proved she has a great sense of humour. Some of her questions were serious (how many books have you written?), but she also wanted to know how many moles I have -- and whether I am married or a nun!

So this afternoon I head for Akulivik, a little town a half hour`s plane ride away. I feel very privileged to have visited Puvirnituq -- I leave with some new friends (thanks Pierrette, the French teacher who hosted me... and the students I worked with) and also with two packages of fresh smoked Arctic char from the local fish plant. Will try to write from Akulivik, too. There, I`ll be working on Quebec Roots, a Blue Metropolis Literary Foundation project, together with photographer Thomas Kneubuhler. So `bye for now. Keep warm. Here, it`s minus 16, minus 26 with the windchill factor!!

"Ai" from Akulivik
Hello from Kuujjuaq

Hey, Harry, Sure I remember you! Thanks for writing. And good luck carrying the Olympic torch. Don't drop it!! Best regards from Monique Polak

0 Cancel Reply
Hey, Harry, Sure I remember you! Thanks for writing. And good luck carrying the Olympic torch. Don't drop it!! Best regards from Monique Polak
Cancel Update Comment

Hi Monica, What's up? Thanks for posting a comment! I miss your sense of humour!