"Should I throw it out?"

“Should I throw it out?” a student named Alexandra asked me this morning. Alexandra is in Grade Nine at St. Thomas High School in Pointe-Claire, where I did a school visit today. Alexandra was considering throwing out something she had written for a writing exercise.

Of course, I told Alexandra, “DO NOT THROW IT OUT!”

I then asked if I could take a look at what she’d written and it turned out it was a super interesting set of notes about a childhood memory. Alexandra had even made my job easier by underlining the word bullied, the most important part of her story.

It happens to be lunchtime at St. Thomas as I’m writing this blog entry and how’s this for a coincidence? Alexandra just came by to say hello! Which is handy because I was thinking how I wished I’d told her something author Tamora Pierce once told me: “No word a writer ever writes is wasted.” In other words, everything we write is part of our process. (Of course that doesn't mean you should never throw anything out -- but I wouldn't go throwing out a set of fresh notes.)

Some of the Grade Nines at St. Thomas are working on writing memoirs. I stressed the importance of including details to bring scenes alive. I also explained that writers must be good observers.

Here are a couple of observations I made at St. Thomas today….

While I was speaking to the first class, I noticed a student had turned the bookmark I had given her into a paper airplane! She had hooked the bookmark through the clip on her red pen. This invention (see today's pic!) demonstrated both this student’s creativity and also the fact that she might not have been paying 100 per cent attention to my presentation! 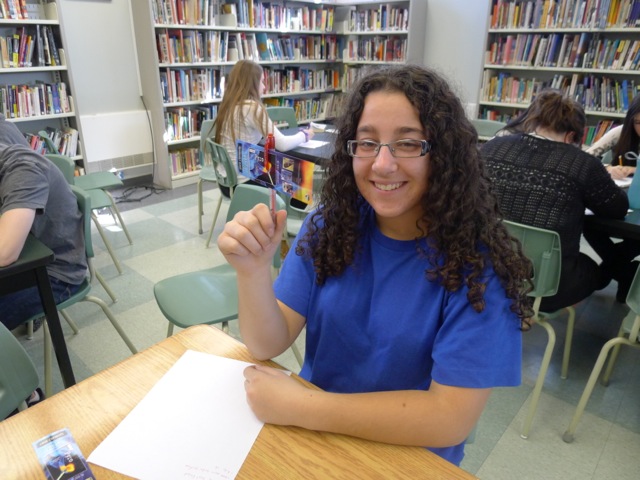 Later, I OVERHEARD (writers should also be good at eavesdropping) a student named Eric say that only the IB (which stands for International Baccalaureate) students bring their books to class. When I mentioned this to the class, Mike, a non-IB student, smacked his book down on the table. That made all of us laugh and of course, it was Mike’s way of saying he is just as studious as an IB student. Also, Mike’s action tells us something about him, doesn’t it? Details like these are great for including in stories.

In addition to teaching St. Thomas students a little about writing, I couldn’t help also doing my favourite activity – hunting for stories. There was an assembly this morning to honour Miss Cyr, the principal who is about to retire. I asked some students whether anything funny happened during the assembly and they told me a good story: that when he was making his speech, one of the vice-principals said to Miss Cyr: “I was hoping you’d retire earlier so I could get your job!” Now that’s the kind of funny remark I might be able to use in a book some day!

I ended my day with a lovely, most amusing group of students. When we talked about how trouble fuels stories, I asked the class whether they should ever get into trouble themselves. I was hoping, of course, that they'd say no, but Diason answered: "Get into trouble sometimes!" And when we were talking about odd places to get story ideas, Emily and John both agreed that, like me, they get good ideas in the SHOWER. Then John added, "Or on the toilet!"

I’ll be back at St. Thomas next Monday to meet with the rest of the Grade Nines. If any of you want to show me your work, come by at lunchtime – I like to have good reading material when I eat my sandwich!

In Which We Are Never Too Old for a Valentine Card...
I Smell Talent!

Hi Emile!
That's a fun coincidence. Thanks for pointing it out! Say hi to Alexandra for me!!

0 Cancel Reply
Hi Emile! That's a fun coincidence. Thanks for pointing it out! Say hi to Alexandra for me!!
Cancel Update Comment
First Page Previous Page 1 Next Page Last Page