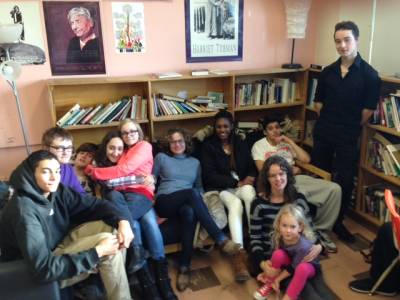 You might get the impression from today's pic that I spent this morning in someone's livingroom -- someone who likes to read! Actually I was with photographer Thomas Kneubuhler, doing a class visit at Outreach High School, an alternative school here in NDG. Thomas (he's not in the pic since he was behind the camera) and I were at Outreach because we're helping the grade eleven class produce a chapter for the 2015 edition of Quebec Roots, a publication that is part of a Blue Mteropolis Literary Foundation project. Ten classes from around the province will each contribute a chapter to the book -- students will get to tell their stories through words and images.

I started the day off by talking a little about my writing process, but mostly, I wanted the students to get started on some writing of their own. We discussed one of my favourite subjects: TROUBLE, and how, without trouble in it, a story doesn't really go anywhere. Then later, when Thomas was outside with the students, helping them shoot photographs, I got to work one-on-one with some of the students on their writing.

And I got some beautiful stuff -- so I asked the students' permission to share a little of it here today. In a powerful piece, a student named Marco recalled being bullied when he was in grade seven. I loved how Marco ended his story with the line: "If I see him [the bully] now, I would only say one word to him: 'Why?'" A student named Karina described what it was like to battle against an alcohol problem. I was very moved by her words, especially when she wrote, "In a weird way, I am grateful for all of it." Karina wrote about how she dreams of becoming a social worker. I have a hunch she'll do a great job! Another student named Aviva took a super creative approach by writing a counting song about cutting. I don't think I'll ever forget the opening line: "Cut one: I'm not done."

I know the students had a blast taking photos. I hope they learned a little about writing, too. The writing they did today really touched me -- and I'm sure it'll touch the readers of their chapter. Special thanks to their teacher, Annelise Ogle (that's her in the stripes in today's pic, with her daughter on her lap.) Today is one of those days where I can't help feeling that telling our stories matters more than anything else. Thanks also to Mrs. Ogle's students for your hard work. I look forward to reading more of your stories!

Tristan here. Hope you put my Name to good use. Good luck wot the stores.

Will do, Tristan. And good luck with YOUR stories. "Take me there!"

0 Cancel Reply
Will do, Tristan. And good luck with YOUR stories. "Take me there!"
Cancel Update Comment
First Page Previous Page 1 Next Page Last Page