Reporting in from the Blue Met Kids' Festival 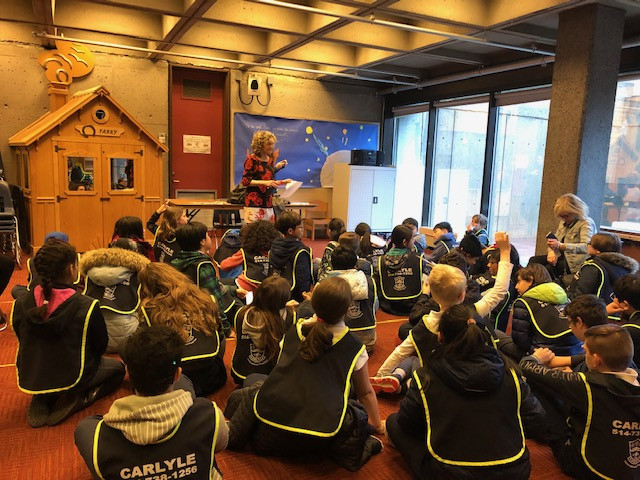 It's my favourite time of year in Montreal -- spring and the start of our city's Blue Metropolis Literary Festival.

The kids' festival began this week. I spent part of my afternoon today at the Reginald J.P. Lawson Library in Town of Mount Royal, working with three grade five classes from nearby Carlyle School. The first thing I told my audience was how cool the Blue Met Literary Festival is. Over the next ten days, they can attend literary events for kids around the city -- and when they're older, they should definitely check out the grown-up part of the festival! Writers from around the world travel to Montreal to read and be interviewed and take part in panel discussions. (Click on the link in the first paragraph if you want to access this year's festival schedule.)

Today, I focused on my Princess Angelica books. I told the students how I got the idea for the series -- that it was based on a MEMORY of how, when I was eleven, I told the girls at summer camp that I was a princess. Memory, I explained, is an important tool in a writer's toolbox.

I also explained that writers need to be on the hunt for interesting DETAILS. Because I wanted to give a few examples, I pointed out how Serena was lying down with her legs stretched straight out in front of her, how Ian gave me several intelligent nods, and how Chiara was tilting her head to the side when she was looking at me.

A student named Eddy agreed when I said that in my opinion, stories are the most important thing of all. When I asked him why he agreed, Eddy said, "because you can remember what happened before and write something."

A student named Zen (cool name!) told me he has three stories he wants to write, and that one is about his dog who had cancer. I told Zen that that sounds like an important story, one that could help a lot of kids who might be going through a similar experience.

I told the students that soon, I'll be starting the fourth book in the Princess Angelica series -- and this time, I'm going to make Angelica a ski instructor. Several of the kids had zany ideas for me -- and I love zany ideas. I had explained that writers need to ask themselves WHAT IF? ... and the kids demonstrated that, like me, their brains enjoying playing the WHAT IF game.

Another Report from Blue Met: Special Kids at REAC...
Buzzing After the Imagination Writers' Festival in...