No time for a long blog entry today -- that's because I have a launch to get to. My own! And I need to go and buy half-a-dozen cartons of chocolate milk. Usually, people serve wine and cheese at book launches. But today's launch of my latest YA title, Hate Mail, takes place at a school (no wine allowed!). That's because I wrote the book last year with the help of Miss Scott's Grade Nine class at Riverdale High School in Pierrefonds.

If you've read my blog before, you may remember that the novel grew out of a project called Libres comme l'art, sponsored in large part by the Blue Metropolis Literary Foundation. Thanks to the project, I was writer-in-residence last year at Riverdale and my task was to write five chapters of a story having to do with autism and depression. And then a wonderful thing happened: the manuscript grew and grew (thanks in large part to the students' input) and my publisher, Orca Books, acquired the manuscript. And now it's a real live book!

Yesterday, CBC Radio's All in a Weekend broadcast an interview with me and Hamza Bashir, one of Miss Scott's students. Hamza is the young man who came up with the idea behind Hate Mail. Here's a link to the interview in case you want to check it out. (And special thanks to reporter Sonali Karnick, who not only did a lovely interview, but who gave Hamza and his pals Shane and Bhahee Shan a a great tour of the CBC headquarters.)

As I said during the interview, this project was the most fun I ever had as an author. Imagine having your very own focus group -- a team of bright teenagers who told me what they liked about my story, what needed fixing, and who shared their own stories with me. Along the way, I hope they learned about the writing process -- the brainstorming behind a book, the research, the multiple drafts, and the not giving up when things get tough. I promise to post a pic from the launch later. Okay, time to get the chocolate milk! 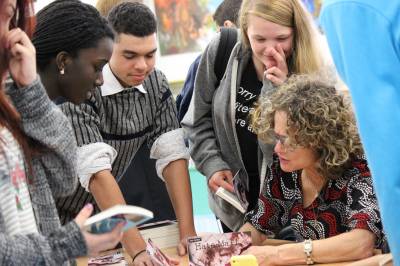 PS: It's seven at night and I'm back home... reporting to tell you that the launch was wonderful. Special thanks to the parents and grandparents who turned up. None of this could have happened without teacher Karen Scott, principal Roger Rampersad, librarian Sue Strano and Suzanne Nesbitt from the Lester B. Pearson School Board-- and of course the students. One student, Fahad Elsabawi, made a great speech and I asked his permission to quote from it. Here's what Fahad told the audience: "Thanks to a wonderful and interesting project made possible by Blue Metropolis, we were able to help Monique write a novel. That's a pretty big accomplishment for a high school student! I can tell you I'm proud!" Me too, Fahad! Thanks so much to all of you. You made this the most fun I have ever had working on a book!

Mansfield Park -- 200 Years Later
Back in the Classroom!