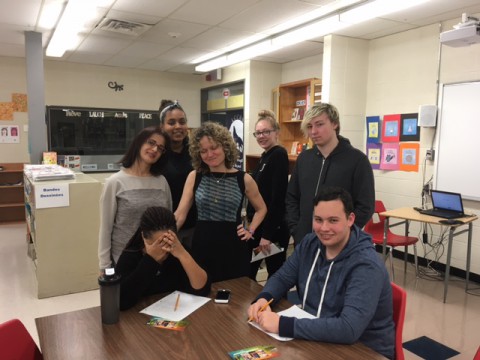 So what if I took a bridge I didn't have to and got totally lost -- and had to put in an emergency SOS phonecall -- on my way to Lasalle Community Comprehensive High School this morning? It was ALL WORTH IT because the two groups of students I worked with ... well... they made me happy! (Hopefully I taught them some stuff too!)

I started the morning with Miss Di Criscio's Grade Seven class. When I asked if any of them tend to ask themselves what I call the "magic question": "What if?" Abigail answered, "I ask 'What if?' all day every day!" Way to go, Abigail! You sound like a writer! You know how I'm always on the hunt for cool names to use for future characters in my books? Well, one of the Grade Seven students was named Blade. When I asked him how his parents came up with that name, he told me, "They were into medieval stuff." Très cool, Blade. (I also met a student named Karma -- but she was in my second group. Love her name too.)

If you're a regular reader of this blog, you know how I love observing small, interesting things. I noticed that a student named Fardin is detail-oriented. When I asked the students to write something down, Fardin asked, "Is there a comma?" I think it would be fun to use a character like Fardin in a story, don't you? I also noticed that a student named Alyssa was kind -- this is because, when I mentioned that my mom died four months ago, Alyssa looked at me and said, "Sorry for your loss."

During my break, a talented Grade Ten student named Alice dropped by the library to show me some poetry she's been working on as part of a project called Leave Out Violence. I gave Alice a few tips for tightening up her poems -- such as to reduce the number of words whenever possible, and to avoid rhyme when it sounds forced. I also asked Alice for permission to share one of her lines that I liked most. It comes from a poem called "Funerals": "Funerals aren't for the living/ They're for the dead." What I like about these lines is that they are clear, concise and powerful. Keep writing, Alice!

I ended my morning with students in the school's Phoenix program, an alternative program that lets them complete their Sec. IV and V classes. (You can see a few of them in today's pic.) These kids have stories! When they first sat down in the library, I noticed that a student named Sabrina was sitting alone. When I mentioned this, another student -- Austin -- got up from his table and went to sit with her. I loved that. Also, it would make a great scene in a book. Thanks for the inspiration, Sabrina and Austin.

I gave both groups of students a short writing exercise. A student named Kyle said I could go ahead and quote my favourite line from what he wrote. Here goes: "I am addicted to the feeling of helping others." That line really touched my heart. Thanks, Kyle, for letting me share it here.

Also, I often say the same things when I do school visits, so it was exciting that today I came up with a new line -- especially for the Phoenix kids. I told them, "Cash in on your misery and write about it!" What do you think of that wisdom? (I like it a lot!)

Special thanks to my friend, librarian Miss Lumi, for inviting me to LCCHS today -- and for helping me find my way from the Mercier Bridge. (That's Miss Lumi next to me in today's pic.) Thanks to the students for being wonderful. Let's just say -- I needed you today!