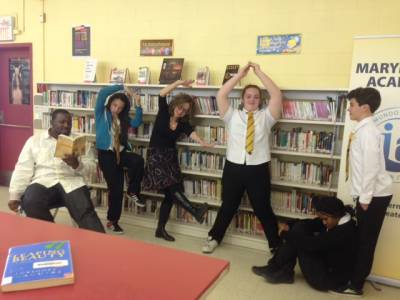 Marymount Acadmey is in my neighbourhood -- in fact, I regularly jog by the building, but today was the first time I ever got to go inside! And I had a great time working with Mr. Harris's Grade 7 English class.

My day started with a hug -- from the school's vice-principal, Ms. Vourdousis. Thanks for getting my day off to a happy start, Ms. V! I don't think I've ever been hugged by a vice-principal before -- and it was fun!

Librarian Mr. Langdon kindly let us set up shop in his library. When I said I'd like the desks grouped more closely together, Mr. Harris asked for help from a student named Cody. Mr. Harris told Cody: "Show me your muscles." That was when a student named Tahleah who was sitting next to Cody piped up and said, "I've got muscles too!" I thought that was a great line, and I wrote it down so I could use it in a book. (Coincidentally, two characters in the story I am revising happen to be having a similar conversation.)

Hey, can you tell what we are doing in today's pic? The idea came from a student named Celeste, who it turns out is also one of the winners of the school's recent public speaking contest. Can you tell which word we are trying to "write"? If you need a clue, that's Mr. Harris sitting in front of us, doing the thing we are trying to demonstrate!

The students had loads of great questions for me. Henry had the most questions, and he also provided some sensitive, intelligent answers. Great work today, Henry! A student named Katherine asked a question I really liked and that I've never been asked before: "How do you get better at writing?" I told her the answer is by writing and reading A LOT!

It's nearly time for me to go and teach my own classes at Marianopolis College, but I also want to share an interesting observation from a student named Ebony. She thinks that the boys at her school are even more interested in their appearance than the girls are, only Ebony put it better: "Nowadays boys be the ones caring about their hair, shoes and clothes. And the girls are like, 'We don't care!'"

Both writing exercises I did with the group today went well. Three students didn't want me to read what they had written -- I always get excited when that happens. As I see it, it means that these students REALLY NEED TO WRITE THOSE STORIES.

So, thanks to the students for being great workshop participants; to Mr. Harris for sharing his class with me; to Mr. Langdon for sharing the library; and to Ms. Vourdousis and principal Ms. Cresta for making today's visit happen.

My morning started with a hug from the school's vice-principal, Ms. Vourdousis --

Authors for Indies Coming Up Soon
"She almost made me cry... but don't tell anyone I...