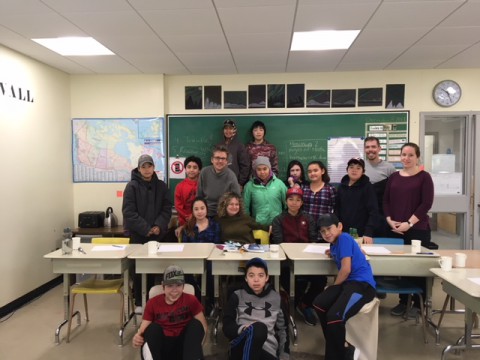 Today’s blog post comes to you from Kuujjuaq, in Nunavik, Quebec. I am here with my friend photographer Thomas Kneubuhler (he's behind me in today's pic) for a Blue Metropolis project called Quebec Roots, in which students from across Quebec work with teams of writers and photographers in order to contribute a chapter to a real-life book that will be published next year.

Only Thomas and I weren’t really supposed to be in Kuujuaq – except for a quick stopover at the airport. But because of flight delays, we ended up overnighting here – and then we decided we might as well do a combination writing and photography workshop this morning at Jaanimmarik School. (Thanks Amber Douthwright, a ped counsellor at Kativik School Board for getting all this organized in a jiffy!)

Though the teachers (Yussef, Guillaume, Kelsey and Sebastien) only learned at the last minute we’d be turning up in their classrooms, I think it’s fair to say that … well… the kids had fun and learned a thing or two (and we had a blast).

We started the morning with Yussef and Guillaume’s Sec. II classes. Though I had to wake them up a little, they turned out to be a lively, bright group. When I explained that I always hate my first drafts and asked them what they think I do after I finish a first draft, a student named Shannon answered, “Rewrite!” Exactly, Shannon! And a student named Julian helped me with my Inuktitut pronunciation: “Be loose; it’s better.” (Julian also had some beautiful photographs to show Thomas.)

I loved getting to hear Thomas’s presentation this morning. He showed the students one of his photos of a security guard, and explained that he took about 100 pics of the guard before he got it right. Which prompted me to call out, “See! That’s like rewriting!”

Thomas also told both groups of students that in artistic photography (as opposed say to fashion photography or sports photography), the artist has to come up with an idea. He told the kids, “The idea has to come from you. Something you personally are fascinated by or care about.” That’s definitely true for writing projects too!

We also worked with Kelsey and Sebastien’s Sec I students, plus a couple of Sec V’s (those are the kids in today's pic). I’m not supposed to have favourites, but a student named Makimma stole my heart when I asked the same question I’d asked the earlier group: “What do writers like me do when we finish our first draft and we hate it?” Makimma answered, “Re-try.” You know what, Makimma? I like re-try even more than rewrite! That’s because, as with so many things, including writing and photography, trying and trying again and then trying some more… well that’s really what makes it happen.

We’re off next to the village of Tasujiak, then on to Quaqtaq. Stay tuned for more blog entries – and adventures! Thanks to our friends in Kuujjuaq for being so much fun today!