The Air Was Thick With Stories 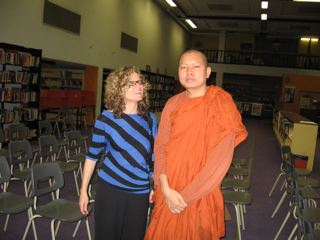 I often tell students that, to me, "The air feels thick with stories." That's because no matter who we are, we all have stories living inside us.

This morning, the air felt especially thick to me. I was at Pius X Adult Centre, working with a group of about 100 adult learners. Almost all of them have come to Canada from faraway places including Mexico, Bulgaria and Pakistan. And luckily for us, they have brought their stories with them.

That's Keo with me in today's pic. He is a Buddhist monk who was born in Cambodia, and who's now working at a Buddhist temple in Riviere-des-Prairies. Let's just say I haven't had too many Buddhist monks in my classes! (Thanks to Mandeep for taking our pic.)

I also met Nasir, who's from Pakistan, and who told the group he has been working on a book having to do with smiling. Great topic, Nasir, and I wish you luck with it. Nasir understands that it is important to write regularly. He says he's been working on his book almost daily for nearly six years. When he asked what to do about writer's block, I suggested several things: that he take a shower (warm water on my head often does the trick for me), go for a brisk walk, or best of all, just keep writing... even if it is only to complain on the page ("I have writer's block. I hate when this happens. I just hate it!!").

Another student named Simon, who comes from Bulgaria, expressed his concern that though he may have a great story to tell, he may not have the ability to express himself well enough to tell  it. I told him I think the story is more important than the style. I also pointed out that if he sticks with his project, and has a positive attitude, he stands a better chance of succeeding than if he gives up before he's even started.

Though I love working with teenagers, it was a special treat to meet with a group of adults this morning. Many thanks to librarian Cathy Boyle for inviting me again to Pius X. You guys are wonderful. Now get started on your stories!!