The Gift of Listening

Okay, so I'll admit it: I am not always the best listener (maybe because I do so much talking!!). But it's a skill I am working on.

Today, I was at Vanier College as part of the school's Kleinmann Family Foundation 17th Annual Cegep Symposium on the Holocaust and Genocide. I spoke to Sophie Jacmin's Humanities class ("Knowing Through Fiction") about the work I did interviewing my mother for my novel, What World Is Left. Towards the end of my talk, I told the students how listening to someone's story is like giving them a gift -- and on my way out of the building, I realized that they had given me that gift today, too! Yes, we need food and water and shelter, but we also need to tell our stories and to be listened to. 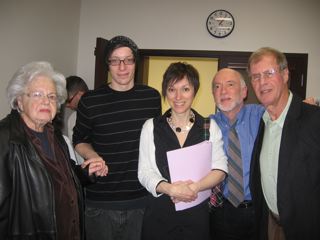 You will see some special people in today's pic. The woman at the far left is Esther Kleinmann. Her husband Peter was a Holocaust survivor and together, he and Esther started the symposium project. Though Peter died 10 years ago, Esther continues the good work they started, and as I told her at the opening ceremony today, Peter felt very present in the room. I think he would have been most impressed with the young people who gathered for the event and with their commitment not only to Holocaust studies, but also to inter-cultural dialogue.

The young man next to Esther is Peter Boschi, an Austrian Gedenkdienst intern who is spending a few months in Montreal. The woman in the middle is Sophie Jacmin, whose class I visited and who is chair of Humanities at Vanier. Next to Sophie is a very special friend, Neil Caplan, the symposium co-coordinator and a longtime Humanities teacher at Vanier. And next to Neil is Yehudi Lindeman, a child survivor of the Holocaust and retired McGill professor.

We all came together to remember the past, but I think we all came away feeling hopeful for the future. Hanging around teenagers often has that effect on the rest of us!

I got a little choked up later when I spoke to Sophie's students. I think that that's because they were such kind listeners, so interested in the story of my mum's experience in a Nazi concentration camp and how it affected us. A student named Fardood suggested that perhaps I should also write about what happened to people like my mum after the war. Fardood, you know I never really thought of that and it's a great suggestion -- one that makes me pause and think. A student named Melody looked really pained when I told the class some of the saddest parts of my mother's story. Later, Melody asked whether my mum has read the book based on her... and I explained that, recently, after my mum recovered from a serious brain injury, the first thing she wanted to read was the book based on her story!

I'm returning to Vanier on Friday morning for another talk and though I hope it'll go well, too, somehow, I get the feeling that today's experience was kind of magic. Thanks to all of you who were there for your gift...