I'm writing to you this morning from Knowlton in Quebec's Eastern Townships. It's a beautiful little town near Brome Lake and I'm here because yesterday I did a reading (and talk) at Brome Lake Books. My talk was part of the Quebec Writers' Federation's Writing Out Loud series.

I must say I had a surprisingly good turnout! Danny McAuley and Lucy Hoblyn, the lovely couple who own the bookstore, had set up a lot of chairs -- and most of them got taken. It also helped, of course, that Danny and Lucy supplied their own three sons for members of the audience!! 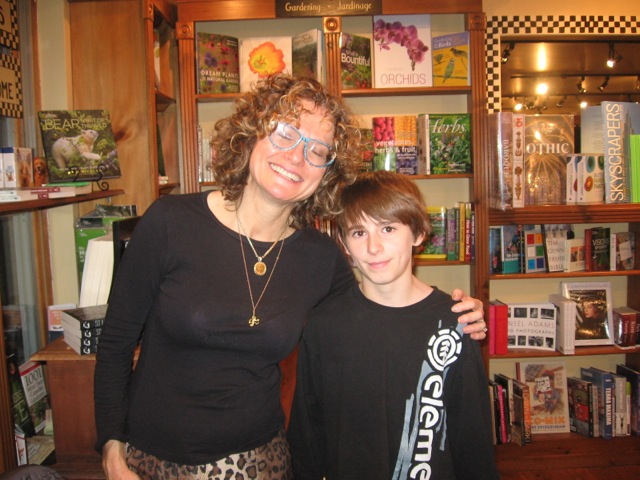 I was supposed to read from my new YA book, So Much It Hurts (and don't worry, I did), but because some of the audience members were a little young (and the subject of So Much It Hurts is a tough one -- violence in relationships), I also talked a little about some of my other books and shared some writing tips.

Danny is directing the play Sinbad, which will run Nov. 27 through Dec. 1 at the Brome Lake Theater. Many members of the audience are in the play. Danny let them finish a little early in exchange, I believe, for attending my reading. A young woman named Kira told me Danny had to cut short the dancing part of yesterday's rehearsal. "For some of us, dancing is not our forté!" Kira said.

I stayed around to chat and sign books after my talk. One of the women in the audience confided that when she was a teenager, she, too, had been in an abusive relationship. Her daughter who was with her knows the story of what happened to her mom. She explained that the sound of motorcycles still upsets her mom -- the young man who struck her had had a motorcycle.

I was very moved by that story. Since the book was only released recently, I'm just beginning to talk about all this in public. I wonder if other women will be telling me similar stories in the months to come. Talking about these things is difficult -- but I also know it's important.

A young man named Kenneth (that's him in today's pic) was also in the audience. He's the narrator as well as a Jedi Knight in Sinbad. Kenneth popped by to tell me he had made a decision. "I think I'm going to be a writer," he told me. "I want to write Medieval-Renaissance fiction."

So, what do you say, dear blog reader -- doesn't that sound like a pretty successful visit? Thanks, Danny and Lucy, for hosting me. Thanks to the kids and adults who came to listen. Thanks to the QWF for sending me to Knowlton. For tickets to Sinbad, telephone 450-242-2510!

How Did My Day Go So Quickly at St. Lawrence Acade...
My Rina Singh

Thank you so much for your visit! It was great to see my son Kenneth and niece Samantha so inspired by your words. We hope you come back to Knowlton again soon!

0 Cancel Reply
Thank you so much for your visit! It was great to see my son Kenneth and niece Samantha so inspired by your words. We hope you come back to Knowlton again soon!
Cancel Update Comment
First Page Previous Page 1 Next Page Last Page